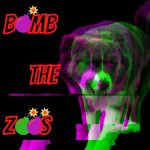 If you love the ducks, don’t feed them bread.
If you’re brown af, don’t feed them tortillas.
She didn’t teach me the second bit, but to be fair,
she was like *maybe* seven. We don’t expect
sevens to be smarter than us, but here she was,
chasing down a clearly sad middle-aged man
and his son around the pond in Sugarhouse
Park to tell them, repeatedly and vehemently,
you’re not supposed to feed the ducks bread.
Straight up wouldn’t leave, even when the tired-ass dad
insisted, We love the ducks. We wouldn’t hurt the ducks.
How shitty it is to try to take joy in nature only
to realize you are ruining nature. You, specifically,
are the reason we can’t have anything nice.
And imagine his son’s shame when he learns
later his father got sonned by a seven and refused
to heed her wisdom. How would you trust what
your father had to say about birds and bees
if you know he’s an accident murderer of ducks?
For the record, if young waterfowl eat too much
bread, they develop a crooked wing that prevents
them from flying. Bread is junk food to ducks—
humans, too, for that matter—and makes the poor
suckers get sick. If you want to feed the ducks,
feed them greens. Learn to love things in a way
that doesn’t make the pond grow algae and poison
whole flocks. Some of you have never sold coke,
but some of you have, and you know the feeling
watching duck-eyed strangers grasp at you, hands
raspy, tongues white and dry in their mouths. You
know the way desire and despair have never
danced without falling restless as wrestlers
to the ground. The ducks will have their vengeance
in this life or the next, before they croak and quack
up their an empty mouthful of crumbs.