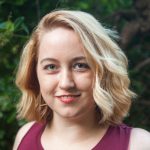 Technically, she says, our heads are always moving faster than our feet.

Technically. Unless you’re walking on your hands, says Julia, and she flips herself upwards into a handstand to demonstrate. She’s never been stable enough to actually walk, actually pick up one hand and put it down in a new place, even for one step, (Is it a step if you’re walking on your hands?) but Tally is laughing at her legs wobbling through the air, first a V, then the splits, then like superman, one leg bent and foot to knee. That is good enough for the joke.

Julia slams to the floor, never good at engaging her core. She doesn’t believe in the controlled fall. She just falls–all out. And Tally, too. It’s a thing they talk about, feeling talented, not understanding that one day they will wish they had built up their strength when they were younger.

But for now, their bodies take the shockwaves with delight, plenty of cushion and cartilage, and fast to heal. Their bodies are still too light for their liking, too little for gravity to grip. Nothing feels enough except too much.

Too bad you’re not very good at that, says Tally, flipping herself upside down and taking one, two, three halting steps of the hands before she has to stop and rebalance, tightening her core even though she does not yet know that this is called tightening your core. She straightens, takes two more steps, and says, you could slow yourself down. Then she falls.

Maybe it has anti-aging properties, says Julia, in a headstand now, static. We should patent it and sell the program to our mothers.

How much faster do you think our heads are going? says Tally, dangling off the couch. How long do you think we’d have to stay upside down to even it out?

Probably most of the time, says Julia. We’ve been standing upright for eleven years.

They spend the rest of the day making plans to sleep like bats. If the pilot program succeeds, they agree, they will bring it to their mothers.

He says, technically, your head is older than your feet. It is her birthday and she is the oldest she’s ever been, though that has not always been true. Much to her chagrin, Julia finds that aging doesn’t go in one direction. One year she had a house, a car, a dog, a wife, and now, she still has the car, and the dog, but the rest are gone.

She says, then stay away from my feet, you cradle robber. They laugh. They laugh because he is younger than she is, if they’re going by linear time. He swipes at her foot and she flicks it away, almost kicking him. They are playing a dangerous game.

He says he wants to take things slow. I just want to be sure we know what we’re getting into.

You mean you want to be sure I know what I’m getting into, Julia says.

That’s when he tells her he mostly dates men.

What on earth provoked you? she can’t help but ask him. To come up to me in that bar?

He shakes his head. I was only looking for a friend.

They take walks on the streets around each of their houses, feeling more conspicuous than ever. They hold hands and hear footsteps and rip their hands apart like teenagers in an overly concerned suburb. In her neighborhood, the streets make square angles, and they walk up and down methodically, memorizing paths. They play math games and turn every third street, every 7/8ths, mark out the Fibonacci sequence, count steps, and avoid cracks. At his place, the streets meander, and so do they, walking ten miles in an hour and two blocks every three days.

One day they stop under the oak tree that lives in both of their neighborhoods, so old its arms can stretch through time zones. I don’t know who is supposed to be in charge, he says, and she asks him, should we kiss?

They stand together for a while, face to face and hands clasped.

The tree has the right idea, he says. It’ll always be the same age if it just keeps growing up.

You know when weird things happen in movies? Like something is just slightly out of place? That’s the kind of thing that always made me feel normal.

Tally is sprawled across two kitchen chairs, her neck lolling off their edges. Julia can see her from the corner of her eye. Her t-shirt is imprinted with a drum set, even though neither of them is in any way musical. It rides high on her waist, bunched towards the ribs, weaving in and out of the spokes on the chair.

Tally cranes her neck up, a forty-five degree angle from the floor. Not like wizards and stuff or aliens, but just like that jam jar falling off the counter.

Julia pulls the sharp lead of her mechanical pencil perpendicular to the lines of her notebook. The lead snaps, as it has seven times already. She clicks down the eraser to reveal more lead, but, like a reflex, she always clicks twice. Now too much is exposed, its bare neck too thin to support the pressure. She holds down the eraser and slides the stick back in, clicks once, deliberately, and sets her thumb aside. As she tries to write, the blunt edge of the plastic makes squeaking sounds on the paper.

Tally needs validation, even though she’s sure Julia will understand. You know? she asks, running her fingers back and forth over the spokes of the chair like a harp.

That calendar flipping pages, says Julia by way of example.

Exactly. That broom flying across the room.

Julia knows what Tally means, and in another moment she might find it compelling, but in this moment she is still trying to access the perfect amount of lead from her pencil. They are sitting at the kitchen table doing homework–or meant to be. Julia is sitting. Tally is sprawled. Tally is doing acrobatics as Julia is doing math. Julia isn’t bothered by Tally’s restlessness. Tally is always restless and it’s never bothered Julia before. So Julia isn’t bothered today either, except that this pencil just is not on her side. Always too much or too little. The whole idea was to make things easier. No more sharpening and sharpening. But still, so much broken lead.

Julia isn’t bothered–not by Tally’s restlessness, or what her mother would call her impolite posture, or that Tally usually just copies Julia’s work. But what they are meant to be doing is studying, not imagining magical things like jam jars flying off of counters, calendars turning pages, or Tally’s shirt inching higher and higher up her chest.

Tally cranes her neck up again, pulling it away from the floor and the magnet of gravity that even she is beginning to feel. She looks at Julia. Julia looks back. What? Julia says.

Tally smiles. I can see up your skirt.

Later that night the raspberry jam jar jumps for joy, but slips and falls off the counter. The jars and cans in the pantry band together the way cylindrical containers know how to do and make a ladder of their bodies to help the raspberry jam jar back up. In the morning, the jam jar leaves herself in a slightly different place, but no one notices.