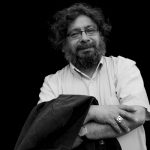 Poetry in translation
by Jaime Huenún and Cynthia Steele

He drank drops of light from a wooden cup,
cold sweat of the resilient, delirious dead.
That’s why he dances and lives amid stiff ferns,
flinging himself onto the fallow mud.
They saw him on the summit, singing demented,
trembling and soaking wet, like an old nag.
He came through ravines shouting remorseless,
his mouth subdued by the winds of hell.
They saw him with a dog on moonlit nights
sucking on the tit of a woman of silt.
They saw him spurring on a famished black ox,
to the sea sailing through the pampas and hills.
What became of his word on the islands and deserts?
What became of his family of ancient potters?
The birds that he loved on winter afternoons
pecked out his eyes, his shoulders, his silence.
He found broken ships, skeletons, coins,
a book soiled by ants’ excrement,
feathers of eaglets vanquished by the wind,
a quartz knife in the hands of a specter.
We asked him his name, his lineage, an ancestor,
he responded in grunts and wolverine drool;
he fell asleep, eyes open, in front of the fire;
he woke up jabbering an unredeemed tongue.
Aburto, the insolent, walked up to his aura,
translated his voice, his gaze, his gestures:
“he says water, woman, forehead, cruel sky;
he says ice, seed, provisions, flag.
He swears under oath, “I am who I will be”—
in the rivers of bile I will set up my camp.
You will enter my face, my laughter, my moan;
you will die with me, forgotten, clothed only in skins.”
And then, only rain from the stubborn gray sky
illuminating dreams and dark satires.
And then, only howls of virulent forests
where Christians and converts die in a trance.

Jaime Huenún Villa, born in Valdivia, Chile in 1967, is an award-winning Mapuche-Huilliche poet whose books include Ceremonias (1999), Puerto Trakl (2008), Reducciones (2012), Fanon City Meu (2018), and La calle Maldestam y otros territorios apócrifos (2016). He has received the Pablo Neruda Prize (2003), a Guggenheim Fellowship (2005), and the Prize from the Chilean National Council on Arts and Culture for best book of poetry published in 2013. He has also edited anthologies of Mapuche poetry, including Epu mari ülkatufe ta fachantü: 20 poetas mapuche contemporáneos (Lom, 2003). Two of his books are available in English translation: Port Trakl (Diálogos, 2008) and Fanon City Meu (Action Books, 2018). Huenún teaches Indigenous poetry at the Universidad Diego Portales in Santiago and works for the Ministry of Cultures, Arts and Patrimony, directing the department of Native Peoples of the Metropolitan Region.