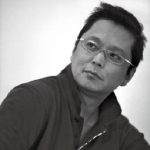 Poetry in translation
by Yang Xiaobin and Canaan Morse

All the guns are buried in the sky
awaiting Autumn’s order to disarm
A full barrage lifts up the legendary palace
lifts up the joking emperor
All the guns are explicating me
their injuries also in the silent parts
bleeding days, bullets are intelligent
All of my selves are pummeling the allies
carving off their tender parts in great numbers
They submit before the war drums roll once
All the white flags are already pinned in braids
So let us rotate the map’s directions
Let us turn the compass’s directions
bring South a little closer to the needle
shipping lanes that transgress will be snapped
One night, the rebel army shoots down the moon
so one cannot tell shadows from bloodstains
The rebel army’s romance
takes the palace stage in powder and rouge

Squeeze an island in your fist
There’s no telling where you’ll toss it.
That fist is a bird grown on the wrist.
Gun-shy. Might as well be globe-shy
Fists burst into laughter, scaring a domestic dog.
The weather’s so good, it hides a hurricane.
Morning glories bloom all over the body, singing a fresh scent
Balled fists drumroll, ringing in a new holiday.
They lie side-by-side in the arms of a clear day.
So girded with gaudy color, you can barely tell
Old flame and new fetish apart.
Though their painted masks switch for several dynasties,
They still say they’re the most beautiful.
Thus you borrow a beating of someone else’s fists
before you can strike the chest in the mirror while the iron’s hot.
Fists fly forth to an unknown end:
This century’s sexy UFO.

Yang Xiaobin is a poet, scholar, and photographer. Born in Shanghai, China, he earned a Ph.D. in Chinese Literature from Yale University and taught at the University of Mississippi for many years before accepting a position at the Academia Sinica in Taiwan. Widely recognized as one of the most important Chinese-language poets of the last thirty years, Yang has published several collections, including Through the Sun Belt (1994), Scenery And Plot (2008), To the Sea’s Nest (2010), and Showering Lessons (2018). His poetry invokes postmodernism as satirical power and attempts to articulate the genuine through verbal play.

Translator
Canaan Morse is a poet and translator. His translation of Ge Fei’s novel The Invisibility Cloak (NYRB Classics Series 2016) won the Susan Sontag Prize for Translation, and his translation of Ge Fei’s award-winning novel Peach Blossom Paradise is forthcoming from NYRB in 2020. Morse’s translations of Chinese prose and poetry by Yang Xiaobin, Tang Siu Wa, He Qifang, and others have been published in multiple journals, including The Kenyon Review, The Baffler, and Asymptote Journal. Morse was co-founder and Poetry Editor for the literary journal Pathlight: New Chinese Writing for four years. He is now a Ph.D. candidate in Chinese Literature at Harvard University.