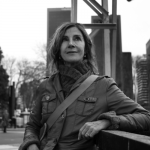 Poetry in translation
by María Negroni and Allison A. deFreese

translated from the Spanish by Allison A. deFreese

Translator’s note: These translated poems are excerpts from Elegía Joseph Cornell/Elegy for Joseph Cornell, an experimental book by María Negroni (Spanish language, Argentina) about Joseph Cornell–as well as about his subjects (including “Godiva” and other actors—among them, children–from his fairytale film Children’s Party). Elegy for Joseph Cornell is at once a monologue, a collection of metafictional microfictions; a series of prose poems; an artist’s quest; the hero’s journey; a filmography, biography, bibliography and inventory; a travel scrapbook and a guidebook for creativity. María Negroni transcends form and genre as she explores, with both luminous and illuminating results, the life of a solitary urban artist whose work also defied conventional classification.

From Elegy for Joseph Cornell by María Negroni

HOMEBODY. 1. A person who prefers introspection to action and therefore lives in a castle of diurnal dreams. 2. Someone who transforms the unattainable into his purest passion not because pursuit of the unattainable prevents him from achieving a real emotional life, but precisely because the unattainable is what nourishes it. 3. In art, someone who does not belong to a specific group, who detests classifications, who considers any stance to be a prison: much like an unmarked player. 3. (fam.) A sort of autistic genius, dedicated to unlearning.

Nudity is an open fruit. Perhaps, if a god were to hold the girl before a fire, he could burn away her mortality. But there are no gods in this landscape. There is a castle where the parties bloom, as well as the battles, the dark-winged night and the double-door that opens into an inner vision. This is no small matter. The girl comes forward, and the hair that covers her excuses her, for now, from performing the most arduous of divine duties: making love. But the hunt for love, with its moon revolutions and blood cycles, its spell of enchantment and its price, is already pursuing her. The belly of darkness, without a sound, follows fast on her heels. Death does not cast a shadow.

María Negroni (Rosario, Argentina) has published over 20 books, including poetry, nonfiction and novels. Islandia, Night Journey, Andanza (The Tango Lyrics), Mouth of Hell, and The Annunciation have appeared in English, and her work has also been translated into Swedish, Portuguese, Italian, and French. María Negroni received a Guggenheim fellowship for poetry in 1994, a Rockefeller Foundation fellowship in 1998, the Fundación Octavio Paz fellowship for poetry in 2001, and The New York Foundation for the Arts fellowship in 2005. She also received a National Book Award for her collection of poems El viaje de la noche, a PEN Award for Islandia as best book of poetry in translation (New York 2001), and the Premio Internacional de Ensayo y Narrativa de Siglo XXI for her book Galería Fantástica. She taught at Sarah Lawrence College from 1999 to 2014, and is now director of Argentina’s first creative writing program, at Universidad Nacional de Tres de Febrero.

Allison A. deFreese has previously translated works by Luis Chitarroni, Amado Nervo, and other Latin American writers. Her writing and literary translations have appeared in 60 magazines and journals. An English language version of María Negroni’s Elegía Joseph Cornell/Elegy for Joseph Cornell, translated by Allison deFreese, will be forthcoming in 2020.