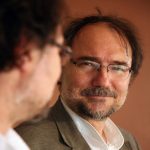 Poetry in translation
by Boris A. Novak

translated from the Slovene by the author

from THE DOORS OF NO RETURN

(fragments from the epos)

Book One: MAPS OF NOSTALGIA

Notebook One: THE ADDRESS

… I was a reflection on the quick mirror of the water,
and I was a shadow on the running window of a train,
a footstep in a bottomless mud, a moment of freedom

in the middle of an anonymous crowd, I was an eye
at the edge of dusk and a skin at the zenith of a day
and a growing distance between two heels of a step,

I was the cry of a boy surrounded by the light
of his mother in a photo which miraculously
survived all those times and roads, and I was the pink face

of a little girl still glowing in poems of a young man
who disappeared in one of the storms of one of the wars,
I was a co-author of a nameless philosophy

of the poor, I was shouting out of fear, I vanished in the rage
of the smoke, I am no longer there, my name is erased
from all the files, I was forgotten a thousand times, at the page

of the peasants’ rebellion I defended with my scythe
the naked field and the village from the armed cavalry,
my face remained drawn at the dark wall of the village church,

I am a blind beggar who kissed the hand of St. Martin
asking him for mercy, and I am deeply imprinted
in the memory of so many women as a handsome

dark-eyed fiddler whose bones were considerably prolonged
in the torture chamber, the memory of a warm spring
evening under the chestnut tree will forever live

in the eastern-like cheek-bones of my female descendants,
the unrest of the dance rhythm will – as wheels of fire –
burn the veins of the grandsons who will never feel

the horseback running through the wide steppe,
I was a woman
who could not run because of the child I was carrying,
the child that I lost when the soldier hit me

right in the belly, I have hidden the new born child
after his mother, a protestant, had lost her life,
I have been feeding him, I have baptized him with the name

meant for my dead son, I am waiting, already a thousand years
I am hardly waiting for all these frightful gangs to withdraw,
so that I would no longer have to be afraid of the boots

numbly echoing through midnight,
I was drawing the towers
and guards in the concentration camp, my drawings
are getting yellow in the museum, I remember how fear

pierces the bones, how soft the skin is in a dark bedroom,
now I am just a name signed in the corner of the drawing,
a name, a family name, a date in the birth certificate,

a place of birth and a place of death, each touch erased,
all happiness and unhappiness, all courage and fear,
in my grave all these languages are mixed, I am lying

under the ruins of Babel, I was an Italian and a German,
a Jew and a Scott forgotten from the French wars,
and I was a Slovene woman, all of us equally covered by moss,

my name was Krulc and Lužar, I had soft skin,
my name was Kerstein and Schwarz, and we went to the altar,
but he kept on leaving,
long and cold is this road,

I was a flag of all my grandfathers – exhaustion, fear and fire –
in infinite wars,
and I was a fragile shadow
of all my mothers, tiny girls leaning over an old

because I am their step in the sand, their reflection in the water,
a shadow of all the changes in all the windows and mirrors,
I was Anica
and Ante, I have drawn my shadows over all the walls

of our family house in the white city, I was the pulse of their hearts,
I was Leopoldina and Anton, but I owe images
of their heaven and hell to the magic of the imagination,

I was Angela and Janez, on an old pale photo
of a poor peasants’ house from Dolenjska* I recognized myself,
I who am alien to them, I who belong to Utopia

*(Slovene: Lowland, The Land of Valleys)

and who am I?
Just a reflection of an ancient flame?
Indeed, who am I, I who once was all these people?
An erased footstep? Am I a saldo, a result of the tribe?

Beyond this old story just an echo and a shadow?
Am I nobody?
To whom belongs this image in the window, on the water,
to whom belongs my face,
who am I? …

In my dreams
I speak,
I speak
dreaming

how I remember
that I forget,
how I hear
what I see,

how I dream
that I dream
how it hurts me.

I dream
that I dream.

FREEDOM IS A VERB
Love is a verb. –Monika van Paemel

Freedom is an unknown road, here, at our threshold
Freedom is a voice, deadly fragile and superb

Boris A. Novak (born in 1953) is a Slovene poet, playwright, translator, and author for children. He teaches Comparative Literature at the University of Ljubljana. In the name of International PEN he organized humanitarian help for refugees from the former Yugoslavia and writers from Sarajevo during the war.