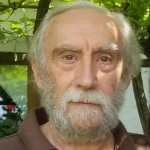 Poetry in translation
by Josip Osti and Martha Kosir

translated from the Slovene by Martha Kosir

I dreamt of a poem: beautiful and wholesome.
A polished crystal ball. An open cage,
filled with the golden, autumn brightness
of the Karst. Inside it, emptiness that
cradled a music box in its heart. The sound
of a dead bird’s flapping wings. And the underground river
whose meandering path was being uncovered by the fog.
It was moving slowly through the vineyards
and solitary pines… I reached for the pencil
that I always keep on my nightstand and held on to it
like a drowning man grasping for a thin,
invisible piece of straw. In the morning,
I woke up with the pencil in my hand
as the tiny ray of sunlight
was illuminating the life and death lines
bisecting on the palm of my hand.
I woke up with the canopy of a chestnut tree in my eyes,
recently washed by the torrent of the night’s rain,
and with the cooing of turtledoves in my ears…
I could not recall my dreams.
This was yet another of my unwritten poems.
A poem, consumed by the night,
just like countless people
in the city where I was born.

From the collection Kraški narcis – Narcissus of the Karst (1999)

WE LIE NAKED IN THE GARDEN

We lie naked in the garden. In front of a naked,
white lily. Naked is the sky above us. Naked is
the grass beneath us. Only the singing of a naked
nightingale can be heard, a nightingale that cuts,
with its diamond beak, into the glass of the naked sky.

From the collection Rosa mystica (2005)

You seem to know where you are going

You seem to know where you are going,
but I am not so sure. Who knows if we
are on the right path? Does it exist at all?
Though it may, the children playing
in the crossroads might have moved
or switched the signpost.

From the collection Na križu ljubezni, On the Cross of Love (2009)

Josip Osti, poet, novelist, essayist, literary critic, anthologist, translator, and editor, was born in 1945 in Sarajevo, Bosnia and Herzegovina. He has published over 40 books of poetry, several novels, numerous books of essays and literary criticism, journalistic texts, and 14 anthologies of Bosnian-Herzegovinian and Slovenian poetry and prose. He has translated over 100 books of Slovenian poetry and prose, as well as 17 plays into Serbo-Croatian and Croatian/Bosnian. He is a recipient of many literary and translation prizes whose works have appeared in over 80 translations into other languages. Most recently, his novel Black, Which Consumed All Other Colors (Črna, ki je pogoltnila vse druge barve), won the 2018 Pont International Book Award. Osti has lived in Slovenia since 1990.

Martha Kosir earned her Ph.D. in Spanish literature from Vanderbilt University. She translates poetry from English into Spanish and from Slovenian into Spanish and English. Her translations have been published in the literary magazine Sirena: Poetry, Art and Criticism, the journal Contemporary Slovenian Poetry, The International Poetry Review, The Drunken Boat, SlavFile (a publication of the Slavic division of the American Translators Association) and Source (a publication of the Literary division of the American Translators Association). She is a professor of Spanish at Gannon University.