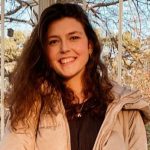 Translated from Spanish by Stephen Kessler

The sky cut up by bars,
cells of so many hopeless jails

The rounded light of the ox’s eye
and a sailor once more defying the storm.

Sky bloody with senseless falling
missiles, because of so many treasured hatreds.

The most intense blue of a huge
twilight under an unknown firmament.

The sunset of a day or of a future
with the vastness of an ocean before my eyes.

Skies for me the color of desire,
I ask for a ride on morning’s wings.

A slow sunrise for one who could believe
the night was more than just a dark stain.

Irene Bablé Marruffi is a young Spanish poet based in Cádiz whose work has won several awards in Spain but has yet to appear in book form.  These are her first poems to appear in English translation.