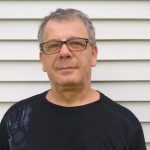 Poetry in translation
by Piotr Maur

Translated from Polish by Katarzyna Jakubiak

[a small, local church. we hide there]

a small, local church. we hide there
from the pouring rain. a few sniffling saints
watch us curiously with their eyes weathered
by looking into eternity. women
nailed for ever to the first rows raise prayers
to christ, who quite effectively manages to imitate
ivory. a sudden gust of wind
opens the door, a cloud of leaves
comes in, followed by a few figures in black,
then the priest, and some men in denim
carrying a white coffin. it’s as small
as a carry-on luggage
left at the train station,
a bag to be taken on a short journey.

I have to stay here a little longer
to make sure nobody steals it.

[actually, I don’t know how to convince you]

actually, I don’t know how to convince you
that my worn-out clothes, old furniture,
ancient TV set and missing bank account
do not signify poverty.
I don’t know if I should try to convince you.
oh how cliché, and so how dubious
it would sound if I told you that I love
other ways of living, and that buttered grains
with yogurt and stewed carrots
are just healthy food.
and believe it or not, but the rumors
about the emptiness of my refrigerator are exaggerated.
it is filled with light, immense light.
for the gloomy hour.
when the night thickens
in this new millennium of darkness
I will feed on light.

Piotr Maur is a Polish poet, author of six poetry collections, including Bezmiar miłości (Zielona Sowa, 2006), which was nominated for the Józef Czechowicz National Poetry Award, Pogrzebowe obrzedy, miłosne ceremonie (K.K. Baczyński Literary Association, 2010), and recently Wiersze wagi lekkopółwrednej (Afront Culture Foundation, 2019). In 1996, he won the Georg Trakl Poetry Award from the Consulate General of Austria in Kraków. In 1998, he received the German and Polish Literature Festival Award in Dresden. English translations of his poetry have appeared in Gulf Coast. His poems were also translated into Spanish, German, Russian and Serbian. He currently lives in the United States.

Katarzyna Jakubiak is a writer, scholar, translator and educator, working in both English and Polish. She is the author of a short story collection Nieostre widzenia (Biuro Literackie, 2012). Her scholarship, translations and fiction appeared in the magazines Twórczość, Gulf Coast, Callaloo, the anthology New European Poets (Graywolf, 2008), and elsewhere. Her book-length Polish translations of Yusef Komunyakaa’s poetry won the New Voices in Translation Award from the Polish magazine Literatura na świecie in 2006. She is an Associate Professor of English at Millersville University of Pennsylvania.