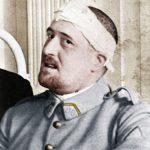 Poetry in translation
by Guillaume Apollinaire and Lynn Levin

Translated from the French by Lynn Levin

Guillaume Apollinaire (1880-1918) was a key voice in the early twentieth-century movement toward surrealism and futurism. Best known for his poetry, especially his volumes Alcools and Calligrammes, Apollinaire wrote both clear traditional, although unpunctuated, lyrics and avant-garde poems that took imaginative and creative risks. His circle included such artists as Pablo Picasso, Georges Braque, Henri Rousseau, and Marcel Duchamp as well as poets Blaise Cendrars, Max Jacob, and Pierre Reverdy. Born in Rome of a Polish mother and an unidentified man, Apollinaire traveled widely through Europe, and eventually made France his home. In 1914, he joined the French army, volunteering to defend his adopted country during World War I. He engaged in active combat and suffered a head wound in 1916. He never fully recovered from the head wound and died of influenza in 1918.

Lynn Levin is a poet, writer, translator, and teacher. Her most recent poetry collection, The Minor Virtues (Ragged Sky, 2020), was listed as one of Spring 2020’s best books by The Philadelphia Inquirer. She is the translator, from the Spanish, of Birds on the Kiswar Tree by Odi Gonzales (2Leaf, 2014) and co-author of Poems for the Writing: Prompts for Poets. Levin teaches at Drexel University. Her website is lynnlevinpoet.com.