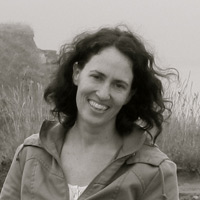 K— breaks her hand then takes up painting.
She uses the broken hand as lever and her other hand as guide.

The medication should not be broken, not crushed or chewed, not chewed then swallowed.
Allow it to dissolve slowly, over your tongue, in 15-30 minute intervals.

The exact cause of broken heart syndrome is unclear.
Constriction of small arteries may play a role,
but the man in the nursing home has low ejection fraction, not takotsubo cardiomyopathy…
In the cocktail party of his heart, too many guests refuse to leave.
An egg breaks only once. The pigment is mixed, a clean brush applied.

Once, a boy kicked me in the temple.
I fell—simple as a rug to the floor—then rose again.
Like punched dough, I was not broken.

I study the mole on my toe.
B—’s marriage broke only once, but once was enough.
Too little paint means you’ve lost your color; too much, and you’ve wasted your materials.
I swallow the pills, four per day, until they break me.
Then I swallow more pills.
(The whole of me is moley.)

The party had been cleared, but the windows were open,
doors unlocked, when the vandals arrived.
Eric and I pull rocks from the space we wish to be the garden.
After three hours, I say I have to break.

Drink kefir, swallow a pill,
let one dissolve slowly.
K— dreams there’s a man in the garden. He threatens her.
He’s running toward her.
Where is her dog?

When the key breaks the lock, we know it’s the wrong key,
fixed there, unchanged by the environment.

The former owner left two mowers in the barn. Frozen to the ground,
one refuses to start: the other mimics gunshots as smoke rises from its motor.
The surgeon opens K—’s hand to inspect for infection.
K— wonders: what makes this hand work?

One dog can’t stop touching her tongue to the kitchen floor.
The other guarded pigs until she was no longer good at her job.
Smoke billows across the road, lifts above the pasture and keeps rising.
Later, waking from a nap, Eric says, I don’t know. Know what? I ask.
He stares blankly, I don’t know. It was a sleep conversation.

In aisle 12, each lock looks the same.
An employee wants to help me.
(There are many kinds of help that I could use:
At the nursing home, Eric’s co-workers offer donations toward a fecal transplant.)

The small dog lunged at a squirrel, and my arm separated from my shoulder.
At the hospital one x-ray technician made a noise,
but the other said, That’s nothing.
I’ve seen a shoulder like that before.

What’s the difference between this $25 lock and this $28 lock?

We say something is broken if it no longer works and if it is not animate.
To begin, separate the egg.
Remove the white without breaking the membrane surrounding the yolk.
Many healthy people carry harmful bacteria.
Though it’s 67% efficient, the furnace heats our home.
The surgeon inserts three small drains though K— believes only two are necessary.

She guides her hand toward a dot of clay, a future halo.
One side effect of the medication was thrush,
another the inability to think clearly or to stay awake.
Occasionally I fall asleep mid-sentence.
Everything is imbued with religious significance.
The hollow ache of the stomach follows the hollow ache of the stomach.
Chester Nez, last of the code talkers, has died.
In Navajo there was no word for bomb, so they called it “egg.”

After B— divorced, we threw a party to celebrate the end of his unhappiness.
He wore blue sneakers and a button down shirt that his wife had never liked,
but this did not end his unhappiness.

The former-nun, turned painting instructor,
holds the yolk softly in its sack,
allows the white to drain away,
then cups the yellow liquid in her palm.

A repairman returns the mowers.
Each sings easily now:
I ride through the field, eye-level to the pasture grass.

A scar is a place.
K— meditates upon the state of her heart,
watches time-lapse videos of a peony releasing its fist.
You can see how the protein cell patterns align in one direction.
Julie talks about rupture and repair, the relationship becoming stronger after each cycle.
Until the U.S. Government could find a use for Native Americans and their languages,
it established a series of quarantines.

I return to the clinic when the pills don’t work,
wait in a line, then wait in a room full of people.
The woman next to me shows me her enlarged hand: she believes it’s broken.

The simple method of application is compensated for by the refined judgment of the colorist.
Your brush barely touches the board. A little lake or puddle should form,
which is why this technique is sometimes referred to as “petit lac.”
The woman is unsure if the sensation of heat is a consequence of breaking.

When the code talker encountered the bodies, their spirits surrounded him.

Joan asks me not to visit,
says she looks forward to seeing me
when I’m not a threat to her immune system,
but then she dies.

Because this tissue lacks a normal blood supply,
sweat glands, or hair, it is less flexible.
I imagine a not-too-far future in which I walk without
this body’s metaphorical tugging on my sleeve.