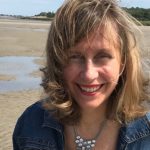 To begin, congratulations, Genia, for the recent nomination of your essay “Slaves of Dance” by Under the Sun:  A Journal of Creative Nonfiction for a Pushcart Prize and for Best American Essays.  I’ve re-read this piece numerous times and continue to marvel at your ability to move from the panoramic to the experiential, from the historical to the personal—all in exquisitely crafted lyrical prose.  For example, in your opening paragraph:

In 1895, two decades before the Great War, almost a quarter of a century before the October Revolution, during the rule of Austro-Hungary, when Vladimir Lenin, the future father of Soviet Communism, still stewed in Siberian exile, the planners of Lviv’s new civic theater chose a marshy area in the center of the city for their prestigious structure. The architect, undeterred by the Poltva River running inconveniently through the site, devised a solid concrete base to stabilize his construction and banished the stream to a subterranean tunnel. Henceforth, the Poltva coursed beneath the Grand Opera House, oblivious to the inaugural gala performance, ignorant of the dramas and comedies that played above, unconcerned by the ravages and holocausts of the unfolding century, and unaware of the moment when, during a relatively peaceful period between two World Wars, my ballerina mother first slipped between the darkened wings and stepped out onto an illuminated stage.

Such gorgeous use of syntax in that last sentence!  It’s almost as if your ballerina mother emerges through the unraveling of words onto the page.  As a former ballet dancer, do you feel that this rhythmic, musical sense of phrasing transfers readily onto your writing?

Thank you for the kind words—coming from a poet, they really mean a lot to me. I’m gratified you’ve sensed melody and rhythm in my work, which is what I aspire to create. When writing, my word choices are influenced as much by beats and accents as they are by the imagery they evoke. A heightened sensitivity to sound means I’m distracted by any aural input—lured into “dancing” away from the page—and I can’t listen to music when writing, although I’ll drum my fingers on the tabletop to echo the rhythm of whatever phrases I’ve just composed. A choreographer will use movement to layer multiple patterns over a musical score: like complementary “melodies” which don’t follow the music note for note and beat for beat. It creates depth and suspense—the kind of richness I strive for through syntax and word choices and, especially, through pacing, like interrupting a too-pleasing string of words with syncopation—I have a weakness for em dashes—or escaping a cadence as it reaches resolution. In theater, beyond the costumes, set and light design which, like adjectives and adverbs, highlight and give color to a production, there’s a subtext to the libretto and an energy which, when light and sound and motion have ceased, can remain even after the curtain falls, and follow an audience out of the theater.

A number of your pieces pay homage to your family as great story tellers—be it through dance, acting, mime, or the mere pleasure of spinning a bedtime story about fantastical beings in remote magical places.  Storytelling runs deep in your blood. Were or are there any other writers in your richly artistic family?

My mother’s family produced actors, singers, and musicians who populated theaters and concert halls in Ukraine, Poland, and Imperial Russia. Her brother Bohdan Nyzankiwsky was a writer who published over a dozen books of poetry and prose, in Europe and, after World War II, with émigré presses in North America. When I was a child, Uncle Bohdan’s satirical poems were often read out loud to me, and his humorous novel Sviato na Oseli  (The Celebration at the Resort, set in the thinly disguised Soyuzivka resort in the Catskills) is the only Ukrainian book I read voluntarily, from cover to cover, in my youth. An inadequate mastery of every nuance of the Ukrainian language has prevented me from translating any of my deceased uncle’s work, but I still hope someone else might. It’s an irony of our family’s nomadic life that I’m more confident transposing from German than from my parents’ mother tongue. My current German-to-English translation project, a book titled Hoffnun’ published in 2017 by mikrotext Verlag Berlin, is a collection of critical, humorous, and hip observations on post-internet life by Iranian Austrian writer Puneh Ansari. Its title is the German word for hope, with the last letter dropped, translated as Hopin’. The author’s unique point of view, her quirky spelling and unorthodox punctuation, as well as her use of Viennese slang, have made this into an immensely enjoyable challenge:

i always used to think for instance when someone said “let’s go on an excursion to xy” a “place” somewhere up in N. Austria

what’s wrong with you ..

there’s nothing there, downtown 1 street one Kleiderbauer store a Nah&Frisch and a pastry shop if you’re ultra-lucky a municipal theatre where a production of Im weissen Rössel plays 8 times a month where at 6 am on Sunday you have to go to church so you don’t break down of deprivation, a ghost town where one knows only from the initiative of civic authorities that they’re there somewhere, the others, the invisible.

but today i see: you can go on excursions, there are sights small, fine things, canyons coves and gorges, signs with houses of birth of just literally anyone, establishments restaurants and hotels, bed&breakfasts, ice-cream parlours, yeah that’s probably it for the most part but sometimes also a thermal spa or worse, a timber museum, or an art gallery

Krems an der Donau for instance is really pretty!

i remember this ice cream saloon back then with the chocolate icing, i saw ice cream icing there for the first (and last) Time. And that pretty pavement!

You have described yourself as a meticulous, obsessive editor of your own work.  Can one compare rehearsing—getting that one grand jeté or pirouette just right—with revising?   Surely, the discipline is there, the willingness to spend as much time as is necessary to get, to quote Stephen Dobyns, “The best words in the best order.”

As a dancer, I wasn’t given much leeway in rehearsals; the choreographer set the steps, and I memorized and repeated until the piece “sat.” It’s a luxury and a privilege now, to choose my own words and work in my own tempo. In a recent interview for Queen Mob’s Tea House, I bemoaned the fact that I never felt in control as a ballet dancer. It’s a bitter truth that an aspiring ballerina must be born with the ideal body, an instrument which one can learn to use and tune but, unlike a musician, will never have the option of upgrading, unlike the pianist who graduates from an inexpensive upright to a Steinway, or the violinist who give concerts on a priceless Stradivari or Guarneri without owning it outright. A ballet education requires intensive training from early adolescence, and even the most talented body will start to break down by thirty. After your twenties, increased practice doesn’t improve your skill—it only hastens retirement. Although I absolutely loved performing, and inherited the right physique for ballet, I was never as happy dancing as I am writing. Without sufficient recovery time between classes, rehearsals, and shows, I felt I was training for the Olympics every single day of the year, but without the expert psychological and medical support top athletes enjoy. The only “support” I received were the prescriptions for painkillers and tranquilizers from well-meaning doctors, which led to an eventual breakdown and hastened my decision to retire from the stage.

Returning to my opening congratulations for your third nomination for the Pushcart, and your first for Best American Essays, I would like to point out with much pride that Solstice Literary Magazine was the first to recognize your talent as an emerging writer.  Your essay “Wounds and Secretions” appeared in the Fall/Winter 2015 issue. How, if any, way(s) has being published changed your writing?

Before “Wounds and Secretions” was published, and before the Internet led us to renew our friendship, I had no contact with writers, although I’d met a few journalists who wrote in languages other than English. I’d lived in Europe for almost forty years and felt isolated and estranged from the English language. My first request to join an online writing group was shot down by a huffy male moderator, on the grounds that my biography consisted of dance, not literature. When Solstice Literary Magazine published that first piece, its editors bestowed on me the gift of credibility. With this, and the accompanying boost to my confidence, I developed enough courage to submit work to other literary magazines and, as other essays and excerpts were published, continued reaching out to other writers. The acceptance and support I’ve received from the literary community since then has been truly heartening, and it’s given me a sense of optimism and a belief in myself that allows me to continue without questioning my worth as a writer.

Since that inaugural publication in 2015, has your memoir taken new turns that have surprised you?

When I first decided to write a memoir, I didn’t have a clear idea of where it would take me, so nothing really surprised me, except maybe the discovery of certain facts about my family, and a few about myself. I also never expected to become an essayist. In the last three years, adapting chapters into self-contained stories, pulling short essays from long ones, and composing even shorter flash nonfiction pieces, I produced enough words to fill a tome. Still, I’m only marginally closer to finishing my book, titled Escape Artists. My initial assumptions about how the memoir would unfold: nostalgic vignettes of family history followed by a linear narrative beginning in childhood, were abandoned, and the current first chapter is set in my troubled thirties. The storyline moves backward and forward in time, jumping between episodes in my life and the lives of my parents who, like yours, were World War II refugees. Investigating the historical facts surrounding the dramatic circumstances of my relatives’ history, I was dismayed by the holes in the tales they’d spun. “Wounds and Secretions” was my first acknowledgment of a connection between my family’s unspoken ordeals and my own struggles. Much has been written in recent years about epigenetic transmission of trauma, and the omissions riddling my parents’ stories continue to confound and distress me. On a more positive note, after Solstice published that first excerpt, I experienced the thrill of reaching an audience and receiving accolades, decades after I’d stepped down from the stage. A dancer’s instinct is to rush out of the wings and toward the sound of clapping, and I’ll always be the performer who acknowledges pleasure and gratitude at receiving even a smattering of applause.

My mother was a wonderful storyteller, but she recounted very little of her childhood or her youth. She told me next to nothing about her friends and offered no information about her lovers. What I know about her adult life away from the stage I learned from my father, second-hand, and not until after she had passed away.   When history lessons in school broached the subject of World War II, I asked my mother about the German occupation. She described a morning when she’d walked to the theater and a military truck lumbered past on Rynok Square. She saw people in its open back, among them her friend Hannah, also a dancer. “And then?” I asked.   My mother turned to the window, and pointed outside, “Look how beautiful the blossoms are,” while I imagined a truck, picking up speed, taking Hannah away forever.