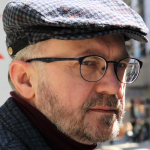 Translated from Ukrainian by Luba Gawur

to be selected among the chosen
that permeated with the odor of hissing sheep
that with an embroidered thread will be woven
the river’s shadow, grafted onto the face and neck
so as to incessantly jerk at the earth

to smell of snow and cinnamon
of sakura blossom tea—tsunami
with a black belt—samurai style—
as though round the forehead,
islands wrap tin hieroglyphs of death

wave sweeps against shore and slaps against sleeve
cliff cracks, and river disappears
a train derails from drowned tracks
the helicopter encircling in spirals
vanishes beyond the mountain
and evaporates in the mist

a white heron like a mark on the face
in the palm—the white rice for this day
and the detector scanning the body
and the waif by the wayside, wearily squatting
with arms holding—like fish fins folding