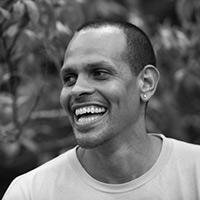 You’re right, you’re right,
the fertilizer’s good—
it wasn’t a gang of dullards
came up with chucking
a fish in the planting hole
or some mid-wife got lucky
with the placenta—
oh, I’ll plant a tree here!—
and a sudden flush of quince
and jam enough for months—yes,
the magic dust our bodies become
casts spells on the roots
about which a dumber man than me
could tell you the chemical processes,
but it’s just magic to me,
which is why a couple springs ago
when first putting in my two bare root plum trees
out back I took the jar which has become
my father’s house,
and lonely for him and hoping to coax him back
for my mother as much as me,
poured some of him in the planting holes
and he dove in glad for the robust air,
saddling a slight gust
into my nose and mouth,
chuckling as I coughed,
but mostly he disappeared
into the minor yawns in the earth
into which I placed the trees,
splaying wide their roots,
casting the grey dust of my old man
evenly throughout the hole,
replacing then the clods
of dense Indiana soil until the roots
and my father were buried,
watering it in all with one hand
while holding the tree
with the other straight as the flag
to the nation of simple joy
of which my father is now a naturalized citizen,
waving the flag
from his subterranean lair,
the roots curled around him
like shawls or jungle gyms, like
hookahs or the arms of ancestors,
before breast-stroking into the xylem,
riding the elevator up
through the cambium and into the leaves where,
when you put your ear close enough,
you can hear him whisper
good morning, where, if you close your eyes
and push your face you can feel
his stubbly jowls and good lord
this year he was giddy at the first
real fruit set and nestled into the 30 or 40 plums
in the two trees, peering out from the sweet meat
with his hands pressed against the purple skin
like cathedral glass,
and imagine his joy as the sun
wizarded forth those abundant sugars
and I plodded barefoot
and prayerful at the first ripe plum’s swell and blush,
almost weepy conjuring
some surely ponderous verse
to convey this bottomless grace,
you know, oh father oh father kind of stuff,
hundreds of hot air balloons
filling the sky in my chest, replacing his intubated body
listing like a boat keel side up, replacing
the steady stream of water from the one eye
which his brother wiped before removing the tube,
keeping his hand on the forehead
until the last wind in his body wandered off,
while my brother wailed like an animal,
and my mother said, weeping,
it’s ok, it’s ok, you can go honey,
at all of which my father
guffawed by kicking from the first bite
buckets of juice down my chin,
staining one of my two button-down shirts,
the salmon colored silk one, hollering
there’s more of that!
almost dancing now in the plum,
in the tree, the way he did as a person,
bent over and biting his lip
and chucking the one hip out
then the other with his elbows cocked
and fists loosely made
and eyes closed and mouth made trumpet
when he knew he could make you happy
just by being a little silly
and sweet.