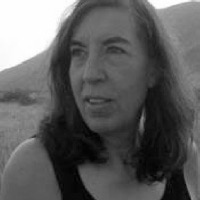 the aggressive man
with the looks of an uncertain skinhead, asked
me if I spoke German or English, as he paced
at our sides like a restless Doberman—what did
he want anyway? He wasn’t begging like the old women
holding out flowers from behind the stone corners
of the ancient buildings or in front of the church,
widows of Stalin’s winter. At my blank
face, reading my skin, my dark eyebrows,
he asked angrily, “Italian, did I speak Spanish?”
Perhaps I shook my head a little, inadvertently
betraying in some micro-expression
that I understood enough English
to refuse his barrage, for he made me a little afraid
on that first day in Vilnius, city of 42 churches
and almost no Jews, those pastel facades
as if floating in the Northern European
summer sky, each church flaunting
above, not wanting to touch down
upon the earth and acknowledge
the killing pits they levitated above, tree roots
entangled with femurs and teeth. This man
so aggressive, interrogative, wanting
to identify us for some undisclosed reason,
seemed an odd harbinger, a weirdly apt
metaphor of the past threatening to engulf
the future, for what would he do if he knew,
if he knew. . . Angry, he shouted “liar!”
at me and veered into the street, where he began
asking others to identify themselves, but still spitting back
at us, “liars!” “I know you speak English,
I know you speak” . . . and in actuality,
I could speak in varying degrees
all the languages he accused me of, but in truth,
his hostility had made me mute; I hate lying,
yet still I lied, suddenly like him
speaking the grammar of survival,
where one will say anything, anything
to make an escape.