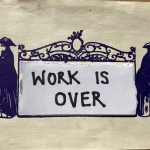 I was trying to inhale the dry air of America by videotelephony. I thought I had nothing to contribute. “All I can think of is smell, because I made a pie and I had some essential oil burning to get rid of the smell but all I can really smell behind the oil is the pie and all I can think about is I wonder what they’re all smelling where they are.”

Pie, rich pie. Fish pie a storm was elsewhere, on my mountain, and many places, muffled out by city. Off the mountain pie bicarbonate of soda on the oven but still pie. A little bit of peppermint. Thick rich pie muffled storm. I had come to my senses and left the top of a mountain, where I had been very cold.

People put what they could smell and what they wrote and I felt like I was in every videotelephony box, with them, and I could smell America.

It was always the same sort of white girl with good hair and skin and a mouth full of pebbles speaking about affect. I had strong feelings about drugs and about sex because I was too disabled but I felt connected to the dead writers they were talking about for the first time on the basis of PID. This was because I thought that PID made you write or behave a certain way and it had an arresting effect on your life which made it clear that nothing much mattered and it was speaking to you and it was broken and tired and had a voice and it was a beautiful voice, the voice of PID.

The voice of PID was a beautiful voice.

Then, because I wasn’t on a mountain anymore, I was thinking about mountain climbers and space explorers, about being appalled by them. The way a deep sense of wonder at the majesty of outer space, galaxies and mountain peaks and chasms was really a deep sense of being-appalled, and I was concerned for all the humans who wanted to climb mountains or explore space or marvel at it.

Why could humans not marvel at what was under their nose and what they were trampling on? It was a state of deep trauma, I supposed.

In the very early morning sometimes I watched the very expensive BBC series about the milky way in the hope it would send me back to sleep but it never did. Because I was watching military propaganda, of course. How many billions of pounds did the technology cost? The Hubble photography “blew my mind”: beautiful and astonishing, but most of all militaristic. This was like watching a weapon being assembled.

& in the same way, it was not enough that the mountains were so wise and grand and beautiful, certain types of human beings had to know the mountain in a way that was about defeating it. This was mother-hatred, to me. I mean was this.

There was a mountain climber whose mother (oh the layers of this) was literally a better mountain climber than him and died on a mountain while he was still a little child, so he had to outdo her. The mountain and his mother were one, and he died too, on a mountain 100 miles away from hers. I watched the digging-out of tents, the helicopter search teams, the man called Big Ibrahim in Pakistan who took the bereaved sister on a quest to say goodbye. Who had carried her on his back as a child.

When we wonder, we are often appalled. Knowledge was a shocking thing often. As a psychological study, the family with the mother and son who died climbing was appalling. The rip-stop materials, the product placement, the way the daughter perhaps connected more deeply with Ibrahim than her father. Who points and knows, and knows, and knows.

Hubble telescopes, no nurses, no safety on trains and buses, no interest in people’s water supplies or for disappeared people everywhere, not on mountains or crossing their outskirts. In gutters or parks or seas or camps, just the vanished, the disposable, the drowned, the hungry, the cost of a trip up a mountain which could pay for people to eat, to receive healthcare, the cost of a trip to space, how many trips to space, oh knowledge, everybody hacking away with crampons and ice picks and rockets full of technology, military technology, at the body of the mother.

We were all doing it. We were all hacking at her or trying to hack her, sending probes and drones to know her, we couldn’t know her, she was doing it too, each mother did it herself, she had to join in to endure, the mystery of the mother was too-appalling. Because it did not exist. Vessels were not to be destroyed or known, but thanked, and asked how we might honour them. I placed several little things on the table ready to post. I had to take a photo of them and send it to my little sister Zoe.

I got an email from an actual ‘artist’ and they said something about an interview with me for tripwire. What’s tripwire I said. I tried googling and it just offered cyber security. They were in London and offered to meet and said the book I wrote remade language from the ruins in some way that sounded really nice and calm for me to hear and also that they felt like a stalker now too. I think because I had written about writing as a kind of self-stalking. I stalked what I was writing around the park earlier. I didn’t mind the dogs or the children but they looked like so much work for their adult humans. I had been resting for a long time and I still hadn’t worked out how to do it, the simplicity of rest was too complex most of the time so it was a new type of learning.

I posted the things to my mum and didn’t know how to describe to the post office worker what was inside. Matches, he said, horrified, no a tiny matchbox with a tiny ceramic key. A sixpence. I don’t know, little things. Everyone was being an asshole, including me. The cafe I used to work in finally went bust and I felt relieved on behalf of its owner. I thought that I might not be strong enough to check my parents on New Year’s Eve.

In the middle of the night, a week before, I could just open the door on that mountain and step outside into total silence, total emptiness, a gulf around me, the wind and the stream the only sounds in the forest across the way, and stars above me which I had no metaphor for. They were just what they were: connecting dot points apparently.

Now I was off the mountain and I was awake in the middle of the night on purpose. I had been dead a long time. It was nobody’s fault, it was everybody’s fault. I was given a bouquet and it looked like the bridal bouquet I wanted, and it was in the winter, only a few weeks away from the time I had got married. The honeymoon hotel was a gingerbread house. When you put the heating on, the pipes emitted a sour, stale smell, a little bit rotten. But other than this everything about the home functioned very efficiently, apart from the fact that you couldn’t have the oven and the television on at the same time. But I lived in a gingerbread house. Off the mountain. I was awake in the middle of the night on purpose and stepping outside it, into a home with sour-smelling pipes but otherwise quite deluxe. If you wanted to think about being-warm and safe and having home security, and such. The bride was a spectre and I loved her so much. Now that I was trans again I had stopped being irritated by it all. I had put it in a gingerbread house for a decade because it was very frightening and I chose three or four books I imagined I would have forwarded to Yorkshire, or perhaps I would carry them there. Being-trans had been a gingerbread house honeymoon-hotel with a locked-up spectre inside, and it was a substantial looking gingerbread house, the kind you would see in a window display not the kind you might make from a kit and watch fall apart. She was inside it, in a shop window display, a little tiny ghost that nobody could see when they looked through the glass. Despite living inside a gingerbread house, she was very hungry.

we just had to change the way we lived and nobody seemed willing to accept it, all of this seemed obvious and I had accepted that it
was going to stay this way. It was going to remain this way. I didn’t think this made me Debbie Downer.

I kept hearing that expression in streaming shows: Debbie Downer.

It would be (Debbie Downer) one of the chapter headings in a book about (but not in any way about) the Real Housewives but actually about 2002. I looked through the photograph albums for a mauve one, a mauve-coloured photo album, because I thought about using a black and white photo for the cover of the current book, a photograph from 1996, Venice or Rome. But I couldn’t find the album.

What does it mean to condense. She said. What was condensed milk, Laure had asked. It gave my brother diabetes, I said. He was given it from a bottle in the sixties as a baby because he had a cleft palate.

That was all I wanted, like a life-science experiment: to prove that I could be condensed. That all the sensory overload could become something neat, a process of extraction because I was a product of the process of extraction, I was helpless in this overwhelming and violent system of extraction. I will do it myself, I wrote: I will condense myself.

Then I spoke to my sister and she was close to suicide so that was another thing I did that day, as well as the fact that I washed and change my sheets, defrosted the freezer, made two fish pies, bought a SILVERSIDE of beef for 18.18 and the girl on the stall said that’s the luckiest number in China. And oranges, mince pies.