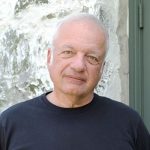 It’s almost always too late in Kafka’s writings,
like the parable in a letter he wrote his lover Milena
about two people each holding a door handle
on opposite sides of the same room, and walking out
or not, sounding a lot like Schrodinger’s quantum cat
in a closed box, alive and dead at once.

No wonder it’s almost always too late for Kafka:
Milena’s own grandmother kept her clocks one hour ahead
in protest of the imperial time of Vienna,
not to mention the backward-running clock
in the Jewish ghetto and the four-way register of time
on the astronomical clock in Stare Mesto.

When construction of St. Vitus Cathedral stopped
for 450 years it was looked on as only a brief interruption
of shortened time like a speeding bullet or a light ray
from Alpha Centauri. No wonder Einstein’s lecture on time
took place in the same rooms where Kafka and Rilke spoke poetry,
no wonder Poincaré received honors at Charles.

Here was a city outside of ordinary time,
riding a chronological wave forward and back,
earlier and later than Paris in every way—it needed an Einstein
to teach its burghers how much time was possible in such a city
and a Kafka to tell them time didn’t matter
when life was an illusion anyway.

So it’s almost always too late with Kafka,
those broken engagements, his midnight-blooming
passions, his day dreaming into the street
from a window in the Kinsky Palace
where he wrote above his father’s store.
Too late for Kafka to see three sisters dead in the camps

and Milena perish in the Second World War.
Way too late for Kafka to see his name painted everywhere
in the Old Town Square, on bookstores and tea cups,
on tavern walls and hotels, the twice-hated German-speaking
Jew who kept himself private even as he fled
the same cobbles and avenues many years before,

always too late and always ahead, a typical Czech.