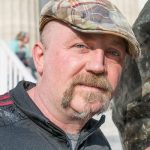 I want to write a sonnet
about Frida Kahlo’s orange trees,
the ones that fed her that she reached up
to pick an orange long before her accident
and after, the same tree weighed
with fruit that reached for her, but my own wife
is in the hospital today
because she has been choreographing
herself towards a slow suicide
after she survived a decade of illness.
She was admitted for pain to the hospital
this week I found 9 little bottles,
you know the kind you might get on an airplane
if you were flying to visit the garden of Frida Kahlo,

bottles of Cinnamon whiskey
she hides in our daughter’s toy bucket
of stuffed unicorns, bears, a monkey, a panda,
and three large bottles of red wine,
two drank to the dregs. I do not judge my wife.
My wife is in a lot of pain,
I called her and they have her on an IV
and when I see her in her hospital bed,
the way I have visited for many years
I can’t help but think of Frida Kahlo
lying in her bed of blood and herbs
after her accident, her spine damaged,
her painting where she rests with a monkey
and a cat on her shoulder, not stuffed ones

like in my daughter’s bucket, my daughter
who talks on the phone to her mother
and asks with that tremulous voice
when she will come home.
Perhaps it is that sound
that will save my wife?
The sound of missing, a sound so tiny.
Like the sound of the tiny umbrella
that Frida Kahlo lost to the wind
and went to find and was hit by a bus,
the silent absence after the death of Frida Kahlo
who no longer moved through the garden,
dead by an embolism but the gardeners,
the workers with names I cannot find,

went on and watered the cactus pear,
trimmed the thorny bougainvillea and the orange tree,
their brown callused hands tended to her spirit
that entered the dark earth of Casa Azul
as one afternoon Frida Kahlo sat up,
finally, after decades of pain, she pushed herself
paint spattered out of bed, and she walked.
to the window and opened the curtains.
My wife will walk out of that hospital today.
With her prescriptions for pain meds
and the green and blue bruises
on her arms from the IV.
Once after her accident,

Frida Kahlo wrote an imaginary birth certificate
for the child she would never have.
She named him Leonardo.
She baptized him after a year.
The losses my wife carries are not imaginary.
Sangrente corazon.
I try to stop the bleeding
with the bandages of my hands.
Our daughter’s sister
sucked from her body,
the years of wounds and hospitals.
She wears a shawl of dark
light around her shoulders,
like the shawl of Frida Kahlo.

She sits alone
in the empty rooms
of our house
and she drinks
until the pain recedes,
until the pain
returns. Today,
she limped
out of the hospital doors,
a nurse holding her arm,
like a young Frida Kahlo,
and I swear I saw
all around her in her hair
were black butterflies.