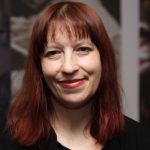 Translated from Macedonian by Ljubica Arsovska and Patricia Marsh

What bed will I breathe my last on?
On some train, on some crossroads?
With the curtain up or down?
At noon or at dead of night?
Is it fate, a curse or good luck
to breathe your last in someone’s presence?
A part of the soul of the one to see me last alive
will depart together with mine.
With her dying breath my granny asked for a bite of pie,
my aunt bought herself the coat to be buried in,
which then hung on the hanger, tag on,
until they dressed her in it in death,
I will want half my grave to be there and half here.
The soul is breathed out in a moment of short circuit
when the fuses burn up, and you are alone at home,
you fumble in the dark
to the end of the hallway,
where by the front door you push them back in their sockets,
the light flashes on and mows down your soul
while reality, blinded,
doesn’t notice it, even though, behind your body,
it too wobbles towards its own hole.