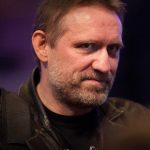 translated from Polish by Elżbieta Wójcik-Leese

Hens are for the motherland ducks are against.
And the dog is divided. For a moment he turns
his bloodshot eyes to the sky. Then his gaze
drops to the road again. In dust up to his armpits

comes a toothless man who likes to tease.
As usual today he shoves a stick between
the rails whistles mocks shouts. The dog stays
put howls without hope. The man searches

for a stone. The hens shriek for. The ducks groan
against. The stone hits the air misses the mark
and lands among the squabblers. The toothless guy
leaves the dog for dead. Blood squeezes his head.

We succeeded in taking
people on this journey.
We put our hands together
thank and infect them.

‘Linguistic energies are exhausted.
The unutterable should be speaking.
But what spoke was self-evident and dead.’

‘Gods should be
scarce.

When gods are rife,
force is scant.’

Wojciech Bonowicz (b.1967), a Polish poet, journalist, editor, non-fiction and children’s writer, has published seven collections of poetry and Selected Poems (2020). His first book, Majority’s Choice (1995), one of the most important debuts of the 1990s, won two awards in major poetry competitions. His fourth volume, High Seas (2006), was awarded the prestigious Gdynia Literary Prize in 2007 and shortlisted for the most important literary award in Poland, the Nike Prize. Polish Signs (2010) was nominated for the Silesius Poetry Award; Echoes (2013) and Second Hand (2017) were shortlisted for the Nike Prize and the Wisława Szymborska Award. His poetry has been translated into German, Spanish, Catalan, Italian, Czech, Slovak, Romanian, Serb, Slovenian, Russian, Ukrainian, Lithuanian and Hebrew. In 2019 he published a volume of essays called Diary of the End of the World and in 2020 Tischner: A Biography. He writes columns for Tygodnik Powszechny and Znak. He lives in Kraków, Poland.

Elżbieta Wójcik-Leese writes with/in English, Polish and Danish: the poetry volume Thirst in Three Directions is forthcoming in 2022. Her English translations of contemporary Polish poetry have featured in various anthologies, journals, and on the London Underground. Nothing More (Arc, 2013), which samples Krystyna Miłobędzka, was shortlisted for the 2015 Popescu European Poetry Translation Prize. Night Truck Driver (Zephyr Press, 2020) features Marcin Świetlicki; Salt Monody (Zephyr Press, 2006) presents Marzanna Kielar. She co-edited, together with Marcin Baran and Anna Skucińska, Carnivorous Boy Carnivorous Bird: Poetry from Poland (Zephyr Press, 2004). Cognitive Poetic Readings in Elizabeth Bishop: Portrait of a Mind Thinking (2010) is based on her research as a Fulbright scholar at the Elizabeth Bishop archives. She co-curates “Transreading” courses on translated and transnational poetries for the Poetry School in London. She lives in Copenhagen, Denmark.