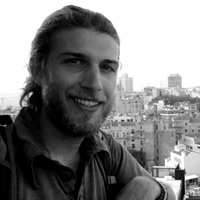 Nothing happening in the man’s head happens
to feel as good as lemon squares taste before
breakfast but after coffee, when the moon,
having just plucked her lingerie from the rooftops,
dies behind the mountain.
The man is bored. By women,
by personifications of the moon. Everything
except lemon squares. He watches television: an actor
enacts the last moments of the last member
of each mammal species predicted to go extinct
in the next century.
The program runs for days.
The moon is not suave; she is spoiled and lonely
and beautiful and drives over us like a car. The man
(shivering on my couch) watches another jungle cat
curl around a shaman’s grave—
the actor’s paws
sink into the green screen humus, become
rivers of digital milk in the underworld.
The man (crying desperately) tries to tie a tie
around the head of the antelope on my wall,
while, on screen, the actor thinks of foreplay, tennis. I run
out the backdoor to hide
in the rich, satin folds of the moon,
but it’s morning—the morning of the hot air
balloon race; their luscious shapes fill the sky.
This one almost skims my roof!
There’s the pilot
and he’s eating a lemon square with, my god!—
a dollop of meringue on top, which he lightly scorches
in the whisper burner, which they use at low altitudes
so as not to scare the livestock.