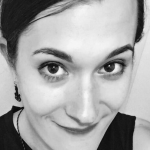 Back when you were a boy, you were
Matt. Now? You say: Call me Matt(ie),
or Matt—which is to say, paint your nails
scarlet as much as you desire, though she
who carries Adam’s apple presents Original
Sin to the world. Translation: there’s a serpent
in your garden, & yes, that’s euphemism
(& yes, that’s pronounced: you+femme+ism).
Now, pin the bachelorette’s testicles to a truck’s
fender, or some other hypocoristic version.
It doesn’t matter, i.e. a diminutive suffix
tacked to a man’s name is still a man’s name.

You peek into a mirror, Mattie smiles back,
but at no angle does she appear in selfies.
Another universe blooms on the other side
of the glass: from there, male eyes castigate
you, Ms. Unperson dancing in a yellow dress
to Gaga. Down and on they settled: you are not
woman—your make-up sucks. You hang your head
in shame; no—you hang the rest of your body
with it. You are the puppetification of a real girl,
whose strings resemble dark, coarse body hair—no,
those fetters are hairs. You ask for a do-over,
a restart. Pretend this did not happen, yes? You
promise you will get the poem right this time:

There’s a woman, & she lives in your body,
& she’s running for President of the United States
of Me. This time, the woman won’t lose, i.e.
she’s a good girl: her skins are moisturized,
& she’s plucked the hairs that circled her nipples
like a wolf pack skirting a Neanderthal bonfire.
Do you wish to try the mirror scene again?
Under her tongue, she pops two kinds of E,
& into the looking-glass mirror falls little Mattie.
Why! a man’s voice wisps out as she tumbles
down, can’t you just smile?