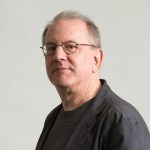 Satori can surge upon you on the subway,
lectured Dr. Tufail in Intro Zen.

The mire gives us the very substance of art,
goes Lorca’s Play and Theory of the Duende.

Greyhound terminal’s greasy spoon,
up to his biceps in Georgia suds, boss-

Of the two strains of modesty, false
and true, he knew neither.  I put that little

thing in it, he said of Little Richard’s Boogie—
gospelized flop, in no way Tutti Frutti,

green as air before a downpour. Always
had that thing, but didn’t know what to do

with that thing I had.   For consistency,
he’d win the Whitman Contradiction Prize—

Gay?  I founded Gay. I wore makeup
and eyelashes when no men were. But once

one draws from light; the other swills
in Bier-stink at the Star Club, Hamburg,

1961. He didn’t open for The Beatles;
The Beatles opened for him. Backstage,

he’d preach from Revelations.  We’d all
sit around and listen, just to hear him talk,

lost weekend).  His own One and Only,
for years an ancient star I didn’t know

that schooled the Beatle-daemonic
white mass of us: don’t sit so still; sex

sings best in tongues, if not yet drag;
Truth’s not only Beauty but Raw Joy.