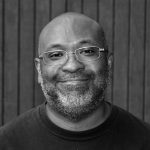 You’re walking downtown, thinking maybe you do miss the costume, the stupid codename, the old headquarters-turned-Bank of America, when the white guy bumps into the woman in front of you, and is off with her purse. You give chase, of course. It’s easy enough to catch him and pin him against the wall / punch and shatter the bricks by his head because, for once, you want someone to fear you. He pulls a gun, so you palm the muzzle, let the bullet blunt against your skin. By now, everyone is well-acquainted with the sound of gunfire and violence, so they run or whip out cell phones to capture the disaster. It’s only when you yell for someone to get help that two officers magically appear with guns drawn, yelling at you to drop the poor purse snatcher. You look down. Your hand is still gripped around the muzzle, his around the trigger. The officer’s yelling so loud you can’t understand a word, so you drop the man and the gun, and when you turn and raise your hands up, one cop opens fire anyway. The other just watches as two bullets ricochet off your skin and strike his partner in his heart, his head.
He’s dead before he hits the ground, before the crowd stops recording you lowering your hands.