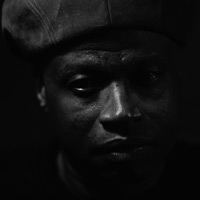 Imagine a clarion call from a familial glass horn difficult to resist: a sweet siren. Its tenor pull inescapable and you’ve been dragged under by its metallic wake over and over. Methodically, and it is the most beautiful hum within rooms the mind constructs: rooms closing themselves off. Internal mechanisms of body and brain are predicated on sound, and to a lesser extent: a white cloud swirling uncontrollably through a glass cylinder. Emitting a multifaceted hum switching on and off upon command, igniting a voice. A seductive slow-hum informing you you crave what the body no longer harbors. From the brain, which controls the senses, the mere inhalation of air replicates what cocaine smells like when ignited at its flashpoint. Then there is the palate, a medicinal taste, and the body can almost conjure smoke funneling from pipe to lung. Eardrums play tonal tricks as the butane lighter’s flick triggers a photographic hunger: eyes watching the process by which the lips wrap around a glass stem, and the lungs involuntarily, then voluntarily, suck the sultry flame, igniting a beige rock as it melts through meshed screens, expanding the chest with smoke until you are high—higher than the last defunct star.

Sophomore year. Second semester on a Wednesday in Howard University’s Locke Hall. Exiting a classical mythology class I walked briskly across campus taking in the cherry trees that had not yet begun to bloom, past the outdated football stadium where one could hear a whistle stop and start wind sprints, to Drew Hall where Patrick, from Miami, Florida and Tony, a native of Whiteville, NC roomed together on the second floor. Drew operated as an all-male dorm facing the football stadium, and its concrete steps were a stone’s throw from McMillian Reservoir Park, which supplied Washington, DC’s municipal water. The three of us met freshman year and discovered a connection in our southerness amidst so many students from the north. This day should not have been different than any other where we smoked weed, maybe dropped some orange sunshine, listened to albums spin around a Technics turntable, and of course, talk mad shit. Only when I entered the dorm room, they both asked if I wanted to play baseball. Consider this: on the way over I donned a gray wool scarf around my neck to deflect the cold penetrating my twenty-year-old frame. The comment didn’t register nor seem logical. Patrick walked over to his wooden desk, opened the drawer and retrieved a small ball of aluminum foil, barely the size of a pinky’s fingernail. Tony went to the closet on his side of the room and pulled out a circular glass pipe from the walk-in closet. I would soon discover this was not for smoking marijuana. Patrick simultaneously opened the foil, which revealed a small solid ball.

I was like, “Patrick, where the fuck you get that?” No answer.

For the first time I detected a difference in both my friends’ demeanor. Taking out a razor blade from the top desk drawer, Patrick shaved a small piece of the rock and placed it on top of the stem standing vertical in the glass bowl. He then reached in the bottom drawer and produced a small red butane torch, pulling the lever with his forefinger until gas leaked from the nozzle. I sat on the bed thinking this hardcore pharmaceutical type shit might not be for me. Tony pulled a lighter from his pants pocket and flicked its wheel until a blue flame ignited the gaseous odor that morphed into sleek fire. Patrick placed the glass stem protruding from the bowl at an angle to his lips and lit the open-ended vertical stem, its top full of meshed screens to stream the rock once it melted into oil-base.

The smoke began as a tornado swirl until it filled the bowl and had nowhere to escape: stuck in suspended animation. A thick white cloud, and as Patrick continued inhaling through the stem, he released his forefinger from the air hole, and the cornered smoke funneled slow like to an open passage. The seepage crawled up the vertical stem until it filled his mouth, then lungs. When Patrick could no longer inhale—he removed the flame, released the pipe from his lips—slowly flushing smoke from his nostrils, then mouth. He passed the bowl and I mimicked his behavior until my lungs, too, filled. I flushed the smoke and waited for the immaculate conception, something—anything. I felt nothing but the need to breathe. Somehow I felt cheated, like there was this big secret being deliberated and everybody knew it but me. Tony repeated the same steps and soared to a place I did not have a passport to enter.

A month later, Patrick asked me to meet him behind the Blackburn Student Center at Howard whose backside faced the reservoir. After that introduction to cocaine weeks earlier, Patrick told me he coped the drugs on Fairmont Street as powder and cooked it up in a vial, that maybe we could make extra money selling drugs, either weed or cocaine. He brought along Craig Davis, a second semester freshman from Miami and we meandered to where the sloping grass provided a clear water view but was blocked from main campus. We lit a joint and Craig talked about his father, how he worked on the docks in Miami, smuggling weed and cocaine from the Bahamas to the states. His father had connections with the Cubans, South Americans and the Eleutheran Islands.

Craig scoffed at the fast-burning weed, claiming he could score a better grade on the streets in Miami, or the bottom as he called his hometown. He promised that if we ponied up our student loan money, we could cop some good weed there and get paid. Although Patrick hailed from Miami, too, it was evident during our conversation he and Craig grew up in two different worlds within the same city. A flock of egrets hovered motionless, suspended in midair over the reservoir, while we sat hillside. Since our first day on campus we watched privileged kids flaunt their parents’ “Brown Paper Bag and Blue-Veined wealth” through expensive cars and designer clothes, that “Jack and Jill” shit we could not be a part of, Jack and Jill being a social society introduced during the 1930s to offer African American children a place to socialize with families on the same economic level. In other words, no single parents, no average income and no bad credit need apply. Jack and Jill parents were doctors and dentists, and their children dined at expensive restaurants in Adams Morgan and Dupont Circle on monthly allowances. Patrick and Craig completed the drive to Miami in a weekend.

The knock came at my dorm room door on a Sunday shortly after midnight. Craig entered first and opened a light blue suitcase containing two pounds of some of the prettiest marijuana I’d laid eyes on in my twenty years of living, the odor so pungent it instantly gave me a contact. Patrick, right behind Craig, brought a bottle of cognac from his coat pocket. We smoked and drank whiskey until morning yellow pierced my windowpanes, stabbing sickles of light through the smoke. The next day money came quickly—so quick bank accounts had to be opened because money wrapped in rubber bands under the mattress would not suffice. New friends materialized as if by abracadabra. Most students didn’t see me before because my parents were not on their parents’ economic level. These new “friends” appeared because you have something they want—need. Drugs render you invincible, pulled into a room of narcissistic arrogance; but nonetheless, you mount the crest of the wave you’ve been given and you ride baby, ride. At night I sat, alone, and fingered through the dollar bills—high off the ink smell. Even if something was slightly off kilter in my physical presentation of me, I couldn’t see it, couldn’t feel the slippage nor the torque tugging at my heels, whispering slow down baby boy, slow down.