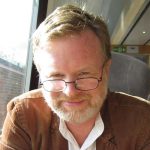 Erica Charis-Molling’s How We Burn will be published in April 2022 as part of the Robin Becker Chapbook Series at Seven Kitchens Press.

Robbie Gamble: I’d like to start with the title, which is so apt, and so compressed, and speaks to so many layers of your chapbook, beginning with the fundamentalist Christian belief about how sinners suffer for all eternity, to the passion you experienced when you were finally able to love another woman. And there is something transformational about burning: fuel becoming heat, light, energy. Titles can be tricky, and I’m wondering, did this project spring forth as a concept from the title, or did you start writing a disparate group of poems that coalesced into this vision?

Erica Charis-Molling: I love that the title seems to you like it could have inspired the content! When I started my MFA program, I was just a few years out of the closet. As I started my manuscript, I didn’t set out to write semi-autobiographical poems about that experience at all. It just began to emerge as a theme on the page, again and again. In retrospect, I was trying to find the language I needed to tell my story on my own terms and to explore what, if anything, remained of the faith I’d once had. I was also trying to find my poetic voice and explore what poems were capable of doing on the page. So I just kept leaning into all of those questions until eventually, and with the help of numerous thoughtful critiques, I had the collection in this book. Only then did I start trying to find a title that could hold all of the parts of that work—and after numerous misfits, I finally found the one that clicked everything into place.

RG: These poems are steeped in Scriptural language and imagery at so many turns: from the Spirit/water/Eve images of the Creation story in the opening poem “Fearfully (un)made” to the plague references in “After Exodus” to the deftly selected Bible verses that serve as scaffolding for your Golden Shovel poems. Why was it so important for you to make extensive use of, and ultimately co-opt this language as you move away from the traditional Christian identity you once upheld?

ECM: While I was raised in a church, I wasn’t actually raised in a conservative one! I was raised in a liberal Protestant church, but I took a decade-long detour into evangelicalism starting at the end of high school (much to my family’s consternation). By those churches I was taught to follow Biblical decrees more strictly and to conform to a specific cultural interpretation of its words. I steeped myself in the Bible, reading it cover to cover and studying a large portion of it in great detail. When I decided to leave that community, the perceived cost of walking away was so high—not only the potential loss of a large portion of my adult friends but also the threatened loss of relationship with God and those stories. I had an intense grieving period where I would go to affirming churches and cry in the pew because even in welcoming spaces God felt so far away and I’d been taught that the distance between us was my fault. So the poems reflect the process of trying to find my way back to a loving God who created me and wouldn’t leave me for being that person—and ultimately finding there was no going back to the God of my youth. I had to feel my way into something entirely new, while still feeling compelled to grapple with the biblical language and stories that had both been a source of great comfort and great pain for me.

RG: I’m curious about the heroines you selected to appear in these poems: Sylvia Earle, Sister Mary Elizabeth Clark, and Lena Waithe [and possibly also Billy Porter]. How have they been important influences on your journey to becoming who you are now?

ECM: I would definitely include Billy Porter in that list! As I tried to build a new spiritual space for myself, I found myself looking for people I could look to for inspiration and encouragement. It’s hard to find those heroines in the Bible—there are so few women given anything more than a passing mention and those that are, are generally known for their service to important men. But I vividly remember seeing a picture of Lena Waithe in her rainbow cape and immediately seeing in her a queer counterpart to Joseph in his technicolor dreamcoat. There’s a sort of double vision my decade in the church has left me with I suppose. A vision as well as a need to honor those who would have been seen as broken in some of my old church circles and say: no, look they are actually whole and holy.

RG: You have a wonderful affinity for a range of poetic forms, from your “Abcedarian lamentation for leaving the church” to the three Golden Shovels, to your two powerful transformations of the Lord’s Prayer. How do you decide to work a particular theme into a given form or existing model, as opposed to developing it in free verse?

ECM: As an adult poet, I was trained with one foot in slam poetry and the other in sonnet writing. I think you can probably see traces of both in my work. But even the poems that are in free verse in the collection spent at least part of their life as formal poetry. “Self-portrait as Lot’s wife” for example, spent at least half of its existence as a villanelle. Many of the poems I was trying to write carried some amount of trauma in them. Forms helped it feel contained on the page, putting some guardrails up as I navigated the poem’s emotional twists and turns. Sometimes that form ended up serving the final poem and it stayed. Other times the form tied the poem up with a too-neat bow and the form needed to be unwrapped a bit to find the poem’s most powerful manifestation.

RG: Can you talk about how your relationship with your body has evolved in your poetry? There is such a striking metamorphosis over the course of this manuscript, from your initial use of empty brackets to stand in for the word “sex” in the awkward parental conversations of “Why I didn’t ‘always know’ my [sex]ual orientation” to the passionate laudatory hymn of “My God Shaped Hole.”

ECM: For me, the thing that has needed the most healing post-church was my relationship with my own body. I’d spent a decade believing that my body and its desires were the enemy of my soul. The “flesh” was always a weakness I had to overcome, rather than a gift I could delight in. The trajectory of the poems in the collection semi-autobiographically follows a healing process—from feelings of loss and shame, through slowly learning to trust the body and finally celebrating and embracing it. Chen Chen once said “My poems are often braver than I am. They can say things I’m not ready to, yet.” Likewise, I’m still very much on the journey the chapbook portrays. But through my poems I get to imagine a version of myself that sings that final hymn and believes it. There was a time I couldn’t even imagine such a thing! So even the act of imagining feels healing—and in imagining, my mind has given me (and maybe others, if my poems find the readers who need them) what I need to keep moving back toward myself.