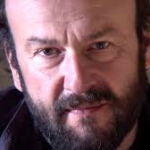 Poetry in translation
by Davide Rondoni and Dr Gregory Pell

At times it seems the
product of nothingness
the day
spent on trollies or in café
showcases.

Our cities lack sentinels,
rather those who stay awake do so by trade
or out of distrust.

And the enemy, no one,
has ever seen him coming.

Having Lived with Relentless Lightning

Having lived like this
with hostility in my blood, a head
beaten by dead desires,
with this wolf in my belly, the white
sabers in my eyes, the tyranny
of the wind’s bows playing my back,
having lived like this, with the extinction
of the concept of any morality
and the mind that empties
like light on a video screen that turns off.

Having lived certainly as
a saint and as one dazed
by pain, with my glass
still as a baby within the night,
a hook in the mouth
feeling that even my breath spills
out through my ribs.

Having lived with relentless lightning
in my vertebrae, under the rapid
movement of the sky
and in frozen lights that at night
shine over the road
the fast food display windows
and for a moment in my eyes.

To Saint Paul it was said
for you my grace should suffice,
as strength
in weakness was fulfilled.
Michelangelo lay
his tools at the foot of his finished work
and cried before a revelation.

Milan in the morning
pours out rain
and at times an undiscouraged sun
over the trees and the houses. –
But who
each night in his hands holds back
the dark’s delirium
and who trembles at the whimpering
that runs through empty subway
tunnels?
Having lived
touching
God everywhere, his
tiger face, his gaze
of a woman who has given birth.

Treat me with dignity
she would say
or the rain might have murmured it
on her mouth a bit
pasty,
treat me,
remember that I come from the river, better still,
look, quickly:
my pose is not out of some novelette,
I keep my hands over my belly, my only
hands, my only belly,

then nothing more to say

in the evening of her beauty
I saw a burning night come,
– remember me with dignity,
I too wrote
my name on a tram
ticket and glared forever into
time at a bus stop.

Treat me with a dignity
that nobody knows today,
find it in my wandering
love,
seek it without smiling,
at least believe in it.

In response to the news of a fire set ablaze in an apartment house one night at the end of 1999 somewhere around Milan.

A woman, seeing there was no chance for escape, before falling victim to the flames, threw her ten year old child from the fifth floor, wrapped in a blanket, so that he might be saved.

What was outside, there
what nothingness
or what a sky in that nothingness,
what a night
the fire
pulled down
destroyed everything
stealing your breath.

What was there where you hurled
your child
the nothingness
of the fifth floor, oh what wind, what breath
what gold, what trust in life itself in the dark
but to save him
away
away, in a breath.

And as he fell
you burned maternally.

But your arms on the windowsill
before turning back to carbon and in a recollection
were comets,
Brooklyn bridges of love
in the night outside of Milan.
And I have taken them from you,
lady, leave those arms
to this faraway dance,
to the music that I and you
from two shores in the shadows eternally share.

Dr Gregory Pell is a professor in the Department of Romance Languages and Literatures at Hofstra University where he teaches courses on language, cinema, literature, and translation theory. His critical articles examine such poets as Dante, Paolo Ruffilli, Mario Luzi, Davide Rondoni, Tommaso Lisa, Mario Tobino and Eugenio Montale, the latter of which is the subject of his full-length monograph: Eugenio Montale: Memorial Space, Poetic Time (Troubador 2005). On cinema, he has published pieces on Mihaileanu, Benigni, Kore-Eda, Sergio Rubini, Vicenzo Marra, Mohsen Melliti, Paolo Sorrentino and Matteo Garrone. He is co-editor of the volume At Whom are We Laughing?: Humor in Romance Language Literatures (Cambridge Scholars Publishing, 2013). His latest monograph, Davide Rondoni: Art in the Movement of Creation (FDU Press, 2017), explores the ‘non-ekphrastic’ relationship between art and poetry in the works of Davide Rondoni, John Ashbery, Charles Wright, Mario Luzi, Gjertrud Schnackenberg, Patrizia Fazzi et al.  His on-going research projects focus on Vitaliano Trevisan and the Northeast, the prose and poetry of Goffredo Parise. Currently, he is translating into English the complete works of Neapolitan novelist Angelo Cannavacciuolo.