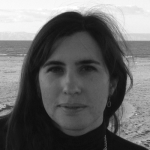 Poetry in translation
by Mariadonata Villa and Ann Kilgo

from THE SIEGE by Mariadonata Villa
Raffaelli Editore, 2012

from Within the City Walls

in the void I plant
tulips
and a few sea
anemones

an absurd spring
on this day, and for tomorrow
a hole of silence

now tell us, Mary
what did you see on the way

when things return to things
and take back their primal names
water, bread, dear
gaze that never goes away

“Nothing stays” is part of the forthcoming collection “Dentro Fogland” (Into Fogland)  and was originally written in English.

not the kingfisher, not the butterfly
not even the flick of light
on the back of your hand

not the steps in the halflight
of sun coming down
which cast a long shadow of dance
through small feet, the other week

nothing stays, and yet

for dark creatures to give birth
to secrets

Mariadonata Villa (Italy, 1977), poet and translator, teaches in Modena, where she lives. Her debut collection, The Siege (2012) was shortlisted for the Carducci Prize. Some of her work as a poet and a translator  was featured in-print reviews  such as ClanDestino, Atelier, versodove, besides a number of on-line publications, and in the Swiss-published edition of the anthology “Davanti agli occhi c’è un ponte”. She is currently working on her second poetry collection. She has written about theatre, art, photography, also serving in the Board of Fondazione Fotografia (presently FMAV) for three years, and translated the books Deep enough for Ivorybills by James Kilgo and Lapsed Agnostic by John Waters.

Ann Kilgo was born in 1974 in Athens, GA. She received her BA in French from the University of the South (Sewanee) and her MA in French Language and Literature from the University of Georgia. After living in France for several years she moved to Modena, Italy, where she lives with her husband and two children. She teaches English and French and works as a freelance translator.