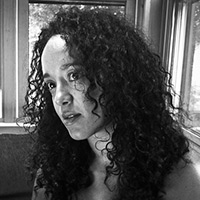 Run away, or Stolen, one very likely new Virginia-born, imported from Gambia, Mundingo or Ibo country, Native of Africa, Island of Antigua, some years in the West Indies, in the ship Yanimarew; named aaron or amy or bacchus alias billy or bob or bonnaund or calls himself cornelius or deadfoot or dick or passed for dinah or gibb or henry perfume, though it is supposed he has changed his name; about 12 or 14, between eighteen and nineteen, 15 or 16, or two and twenty Years of Age; harry or humphrey or isaac bee; about four feet eight, 5 feet 5 or 6, or seven, or eight, or 9, or 10 Inches, or 6 feet high Negro, boy, man, fellow, lad, Wench, girl, Wife, slave, dark mulatto of a long visaged, down look, very black, very dark, a yellow, yellowish, clear, remarkable light Complexion, handsome, well looking, a very honest, agreeable Countenance, a dimple in each cheek when he smiles, jack or james or jem,

speaks quick broken English, understands no English, cannot speak so as to be understood in English, can speak Scotch, sings Scotch songs, talks French, slow of speech, a bewitching and deceitful Tongue, has been much whipped, a mild soft Way of speaking, very talkative when he gets any strong drink, can read pretty well, can read and write, can read but do not know that he can write, a Scar over the Right Eyebrow, seldom if ever speaks the truth; jude or jupiter or lucy; brisk, sensible, artful, cunning, obliging, ingenious, several Scars in his Face, active, genteel, subtle, sly, rogue, impudent, when taxed for committing any fault she appears surprised and is apt to cry, or swear and with dreadful curses upon himself in defense of his innocence even when guilty; nick or peg or peter; small Waist, tall, short, low of stature, slim, clean-limbed, 3 small strokes on each side of his face, like this mark (|),

Mason, Waiting Man, the right knee bent in more than the left, understands breaking oxen, a Sore on his right Leg, Gardening, the Hoe and Axe; can spin, weave, sew, a sore on one of his shins, iron, plow, a film over one of his eyes, pretends to make shoes; stole 3 pounds Cash, thirty or forty Shillings in Silver Money, all a little pitted with the smallpox, a Brass Medal, a fine Damask Table-Cloth, fine Scot Linen, a white Holland Shirt, a Silk Handkerchief, a large scar on one of her elbows, sundry Clothes such as crop Negroes usually wear, branded in his Hand, a petticoat, a Tarlton plaid gown, his wife’s clothes, marked on each Cheek IR, the Letters very dull, an Osnabrug shirt, an old Virginia Cloth Waistcoat, a scar on one of his Hands, a new Negro Cotton Jacket, a Pair of old Check Trousers, one of his fore Teeth much decayed, breeches, new shoes, black knit stockings, a new felt hat, a very remarkable

Set of Teeth, which ride one above the other, an old bay horse very gray about the head, a Gentleman’s horse, has lost some of his fore teeth, an iron pot, a narrow axe, a handsaw, has lost one eye by some accident, an old smooth bore gun, a gun of an uncommon large size, has lost two Joints off two of his Fingers on his right Hand, a fiddle; may perhaps change his Course from Northward to Southward, is supposed to have a pass, will endeavor to pass as a freeman or free Woman, one of his little fingers is crooked, has been gone for eight years, or three or four years, or six weeks, was only landed in the country three days, his Fingers much marked by being often cut, was going toward Matopony River, or into South Carolina, Charlestown, or Philadelphia, on the Chicahominy—lurking about the skirts of that swamp, or North Carolina, in the neighborhood, near Blanton’s Ferry, Mecklenburg County, on board

some Vessel, several other scars in her face, some ship, from among the Indians, on Pamunkey River, in Norfolk, the Frontiers of Virginia, many fresh Marks on his Back, as he frequently talked of that City; has a Brother, several brothers and sisters, a wife, a mother, and I make no doubt…, It’s probable…, It is imagined…, I have some reason…, I do hereby caution…, I do hereby promise I branded stephen or sukey or will S on the cheek and R on the other, and I likewise had his hair cut off, and the Brand, as I am informed, is scarcely perceivable, and he thinks he has a Right to his Freedom, and he says he has no master, and he has been endeavoring My Slaves to go with him, and he even told them he would make away with me if they should be detected, and he entered the Dwelling House of his said Master grievously wounding him with a Broad-Ax in the left Shoulder and Arm, and his holiday clothes were taken from him, and she went away without the least provocation, and a small piece taken out of one ear by accident, but which I cannot recollect, I am afraid.

Most of the language is found in “Runaway Slave Advertisements 1745-1775: A Selection”