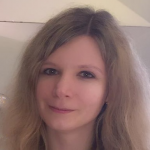 Our train moved faster until our country
was a blue fold in the horizon.
Passengers remained still as our carriage fell
off the dining table. You smiled with lips
that had dried as you queued in the snow
for monthly rations. That day,
you brought back the carcass of a bird,
laid it on the kitchen counter
& thought it was you, except
it had grey fat around the joints.
How far had it run
without a head. How far, how far
were we from each other though
coffined in a one bedroom flat.
The country outside had turned
into an abattoir with no silver tables
to rest on before we were meant to go.
Some days I would wait for you
thinking you laid down in the street
unable to get back up after they bruised you
all the way to your lungs.
You spent nights in the depot,
darkness dripping off you like oil,
diesel vapors clinging to your overcoat.
You watched trains departing from the same tracks
& wondered how far they went. How far
could I go, you asked of me every day
but there was no getting out,
father, you must have known.