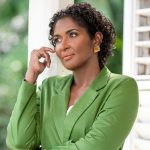 I was initially surprised when the Solidarity Book Project, which is a social justice initiative of Amherst College, Massachusetts, invited me, a Trinidadian writer, to contribute to a communal monument to solidarity. However, when I read the Project’s espoused aim of pushing against legacies of anti-Black racism and settler colonialism, I had to concede the wisdom of their decision to include a West Indian voice.

You see, West Indian Massa and American Massa had much in common. Among those shared characteristics was a penchant for seeking comfort among enslaved women. In both regions, “concubines” and “outside-children” were often allowed privileges on Massa’s estate. And Massa’s most magnanimous gift was manumission.

In this way, intimacy with Massa became, both in America and in the West Indies, a means to security and freedom. That is a kind of intimacy that, by definition, cultivates a lack of emotional honesty and a rise of emotional compartmentalization in order to survive. That is the legacy we are dealing with as descendants of the world that enslavers and slaves made.1

This legacy of false intimacy has forever informed popular culture’s portrayals of colored people throughout the Americas.  However, in the über-connected 21st Century world, we have an opportunity and a responsibility to supplant this legacy in our personal interactions. We can choose to embrace less compartmentalized and more braided perceptions of each other. And we can start by rejecting “the single story”.

Chimamanda Ngozi Adichie has famously condemned “the single story” of Africa as a dark continent of catastrophe, a pervasive narrative which casts Africans only as objects of pity, not as complete human beings2. Her concerns are equally applicable to Caribbean portrayals. We alone, in the diaspora, have been stereotypically and consistently cast in American media and culture as lightweights: happy-go-lucky purveyors of sun-sea-and-sand good vibes, with no real problems or emotions other than those associated with exotic sexuality.

Of particular concern to me, as a writer, is the fact that the single story encourages North Americans to approach Caribbean literature thinking that they know us, with expectations hinged on false intimacy. Queue the lusty Caribbean romance, or the ironic whodunnit in paradise, or the nostalgic tale of the exotic mistress of the evil, white colonial master, or the tearjerker account of the wise but illiterate house-negro.

While Caribbean people have long stood in solidarity with the plight of colored people in the USA – think of Jamaican Marcus Garvey, Trinidadian Kwame Ture – the single story continues to ignore and belittle our Caribbean trials. The single story causes Northerners to take a flat-map view of “The Struggle” as a uniquely American phenomenon, rather than as a ubiquitous feature of race-relations throughout the Americas. Contrary to what our ancestors so boldly declared, “Massa day” is not done, but rather endures in the political and social systems of the region. If only we black, indigenous, and colored peoples of the Americas could see how much we have in common, we might draw sufficient strength and momentum to topple even those intangible monuments to Massa’s rule.

The literature of our Pan-American region is one such avenue for nurturing solidarity. It is a means by which we can discuss, wrestle and work through our shared historical trauma. It crystallizes our inalienable right to speak amongst ourselves on matters which touch and concern us most intimately. As a Trinidadian, I can say that those topics extend beyond race-relations, to encompass broader political tensions associated with being an oil-and-gas-rich island in America’s backyard and sharing a maritime border with Venezuela (a country embargoed by America). Caribbean Literature, as a stream of Pan-American literature, has a right and responsibility to ask hard questions and explore hard answers with granularity, to show ordinary lives tinged with the inherited classism, colorism, ethnic and religious differences which impede our human longing for connection.

Solidarity with this history demands that Caribbean writers resist the implicit pressure to only write into pre-existing narratives of Caribbeanness. And solidarity demands that North Americans make space on their bookshelves for all types of Caribbean stories, including those which seek to explore the incestuous repercussions of our British-American-West Indian cousinhood, and the irony of how sun, sea and sand coexist with bauxite, petroleum, gold, diamond, and cavernous dark shadows.

The 21st Century has wrought convoluted times, conflicting emotions, and epithets like, “shithole countries”. The task of those who would claim allyship and solidarity in these times is to resist and to excite potent response, as well as to settle troubled waters and rebuild safe spaces (Greenidge). Yes, in urgent times, it is tempting to address trouble by aiming at an imagined future or analyzing a recorded past. The true work of solidarity, though, is not escapism, but rather staying present with the trouble and becoming intimate with it.

[1] Greenidge, Kaitlyn. “A Few Thoughts On Intimacies – by Kaitlyn Greenidge – What It Is I Think I’m Doing, 16 July 2021, https://kaitlyngreenidge.substack.com/p/a-few-thoughts-on-intimacies