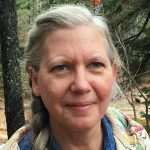 Irene Koronas is a multi-media artist, painter, poet and editor of Wilderness House Literary Review.  She is the author of three volumes of poetry, self portrait drawn from many (Ibbettson Street Press, 2007), Pentakomo Cyprus (Cervena Barva Press, 2009), turtle grass (Muddy River Books, 2014) and many chapbooks.  Her visual art has been shown in a number of regional galleries.

Mary Buchinger Bodwell interviewed Irene for Solstice Magazine in February 2015. Excerpts of the interview appear below.

MB:  Do you think of your own work as experimental?

IK:  Most of my life my work has been experimental.

MB:  What led you to be innovative in your writing?

IK:  I think it came with painting, you know, with Dadaism and the surrealists, with looking at paintings that used collage and word.  I’ve been writing since I’ve been painting.

MB: And you think of it as experimental now?

IK:  Not as much as I used to, because I’m older . . . My experiment now is with trying to make more sense in my poems.  For so long they [the poems] were so obscure, allowing me to take these journeys. Now I’m trying to find ways to be more accessible and still be playful.  It’s not easy to be playful and to carry the thread of thought through. This is not something I’m used to doing, you know, I like to jump around.

MB:  More accessible, is that what you mean by carrying the thread through?

IK:  Well . . . at least in each verse having something that makes sense to readers, even if it doesn’t blend with the previous. To have something that will stimulate them to think, open them up.  Poetry is not like TV, it’s not a straight story.  I like people to think. People want things handed to them, you know, especially in poetry:  here it is, here’s the beginning, here’s the middle, here’s the end, you know, perfect, and if it isn’t there, then the ice cream doesn’t taste right, you know.

MB:  Do you have a label for your work, if you were describing it to someone?

IK:  I used to say it was experimental, multifaceted, but I don’t know what to say, and nobody seems interested in asking me that question, so I haven’t had to come up with an answer.

MB:  Do editors give you any [labels]?

IK:  Oh yeah, I get rejected again and again because [my work] doesn’t carry that golden thread.

IK:  No most don’t say anything to me. The last one said I was a bold writer . . . I like to think of experimental work as reflecting how the mind works; and not all of us think in a straight line.  I don’t even think in a circle, and poetry likes to circle and come back in on itself.  I’m all over the place, I’ve learned how to try to carry on a conversation, but my mind goes in a million directions and maybe a lot of other people’s minds do the same thing only they don’t write that way, they like to focus on one subject . . .  It likes to go from ice cream to swimming, you know, whatever, from high-heeled shoes to sandals.  I can’t explain it, I just do it and it’s taken me years to accept my own writing . . . I take sometimes years to revise and to allow a certain voice to stay there, that’s the trick for me . . . I have sometimes revised something so that it’s perfect, a poem anybody would like, but it’s not really me.

MB:  So when you revise to allow that certain voice, how do you do that, how are you cutting through?

IK:  I allow myself to go from one place to another, and for many years I tried to connect it all.  I was successful, but then I thought why I do I need to do that?  I don’t have a great audience.  I can write for myself, and so I allowed myself to do this.  It’s kind of a contemporary [way to be] in that [today] we can’t stay on one subject too long.  I’ve always been that way, that’s why I wasn’t a good learner, a daydreamer is what my mother would tell me I was, a daydreamer because my mind would wander, just space right out.  In a painting that’s okay, you can do that, with a brush stroke, you can make abstract forms and flow, and be surreal.  Non-objective is what I like more than objective abstraction in painting.  Now how do you do that with writing?  I have had people tell me that my poetry is painterly.

MB:  So what do they mean by that do you think?

IK:  I don’t know what people mean, it doesn’t matter any more.  I’m happy if somebody likes the work, and somebody can relate to it . . . Maybe somebody out there needs to read it so they may do it; just like Gertrude Stein did for me, gave me permission.  Maybe it gives permission to someone else.

MB:  You wrote about repetition in your response regarding being experimental.

IK:  I do repeat.  I’m very repetitive.  I like the grid [in painting].  It’s sanity; it’s a form of keeping things you know, and it’s not only that.  I’ve been painting for a long time.  In order to keep painting now—I’m not inspired anymore like I was when I was young and thought oh that rose is so beautiful let me photograph it, paint it—I have to set up things for myself, and the grid is one way to do this.  It slows me down.  It may take months to paint a large grid, and so that’s what I want to do, I want to keep painting, keep on working.  I don’t know if you know the work of Agnes Martin; she did stripes, for years and years until she died, simple big stripes.  She was from the Midwest, originally from Canada.  One of her paintings is in the MFA [Museum of Fine Arts, Boston].  It’s hard to reproduce her work because it is so subtle, its colors are.  It’s hard to get a book of any of her work.  It’s just these simple stripes and they’re very spiritual.

MB:  I would say your grids are spiritual too.  How would you describe that?

IK:  It’s about meditation, I don’t call it meditation, I don’t meditate but, they’re like prayers in that you’re doing the same thing, repeating the same thing over and over again until you’re almost not even there, which is just like working in the factory on an assembly line, doing the same thing; which I did . . . I get into the color, I’ll get into the lines, I’ll see if something works or doesn’t work, you know, like here…two coats, that’s one coat . . . this is a red with a white, then two sets of lines, so they’re layered even though they may not seem layered.  Then there are at least ten layers there.  Writing’s the same thing for me, layer upon layer upon layer, except that each verse is one of the layers; with the overall piece layered with different thoughts, with different colors.

MB:  So when you revise…

IK:  Revision has a lot to do with erasing . . . I don’t do that a lot, I try to keep the words as they are . . . Because I’m a visual person, language has always been very difficult for me, very difficult.  There are still words that I just don’t understand, I think it’s from growing up in a family that didn’t speak English first of all and I refused to speak Greek even though I went to Greek school for many years, out of defiance.  I didn’t like language, and that’s unusual for a poet to say.  I didn’t like language.  I liked looking at things.  I learned that way.  But to write I had to understand language more.  You know, I still don’t understand what syntax is, what rhythm is.  When poets start talking, I say I don’t even know what you’re talking about.  There’s a place inside me that I can’t go beyond, it’s like I’m blocked in learning.  I see this in children with learning disabilities … so I push myself as far as I can go … I’m a good editor, I can say what works or doesn’t but I can’t say why.  I can say this will work better, but if you want a technical explanation, I can’t give you one.  Do we have to know why the television works?  Not really.

MB:  Would you say you subvert form?

IK:  Yeah, I would say I’m an anarchist.  Most poets are, aren’t they?  They say you can’t rebel against a form unless you know the form, so I try to know form, know if a form works or not, but I have no interest in this.

MB:  What are some of the questions you work through in your writing?

IK:  My own spiritual life I explore through what kind of language I use . . . I’m not always building up.  I’m always stripping down.  We live in a society that is entitled . . .  but you can’t beat people up verbally all the time, that’s for sure.  In turtle grass there was softness.  I used grass as a metaphor for ordinariness.  We step all over it, we lay on it, you know.  Nobody sees the beauty of simple grass.  We don’t we even know the history of grass.  And grass is incredible because it just keeps reinventing itself each season, you know.  I brought all of that into play in that book.  I don’t like to write about orchids, I prefer grass or weeds.  Or Paneras.  Or a cup of coffee instead of wine.  I like the ordinary.

IK:  My new manuscript is revisiting the concept of zero.  I’ve been working on this project called High Dot, zero revisited.  High Dot came from reading about punctuation and the beginning of punctuation really.  One of the Greeks, this guy, came up with three dots to keep everything from being read like it was for the theater.  There was a middle dot, a high dot, and a lower dot. These were indications to the reader of when to pause and when to stop and how long to stop for, those three dots.  So that high dot was a stop, like a lower period we use now. So I’ve just been reading about this and I got caught up in it.  I haven’t even gotten to the comma.  It’s just about the stop sign, how punctuation came into existence, why it came into existence.

Also, I’ve been going back to zero, which was invented for economic reasons, but took on a whole other life.  The Catholic Church had a fit because it became the mark of infinity and they didn’t like the mark of infinity . . . zero really did a number on spiritual thinking.  So I’ve been working with zero with my friend for maybe six years now, for two years we did nothing but write and paint and think about zero.  Now we’re revisiting the implications of zero.  It adds to but never subtracts from, and it can mean nothing, an emotional nothing . . . It has all these different meanings to it.  I should have been a scientist I think.  That’s the manuscript I’ve been working on . . . who’ll take it I have no idea.  It doesn’t really matter as long as I’m working.  I keep working on the High Dot.  Then maybe after that I’ll go to the lower dot, or the pilcrow [paragraph symbol], who knows.