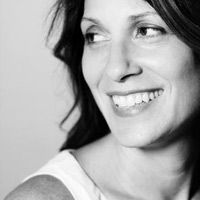 I tried to trespass beyond that invisible barrier that no one is allowed to cross.

I was dead an entire spring.
I lost clumps of hair
and my nails peeled and flaked
until I almost had none.
My bones were lifted into a sack
upon my legs. Even the muscle decayed
from the lack of wild oranges and tea.
I could only fill the cup to the rim so many times
before the spill. This is the myth of my life.
In Spain a cricket was loose in our kitchen,
and it’s chirp was like my name
or like the words yes and yes.
But what could a dead woman know of yes?
That summer, one cricket became two
two became four. It was then I remembered
the trill and grind of my name.
Like a vandal with a can of red spray paint
I may scrawl the words kill all lies
across my Guernica. Who will be the bull,
the horse? Who the severed head and arm?
Under the bald lamp like an eye,
I will expose old scars and breastfeed
a shadow of myself.