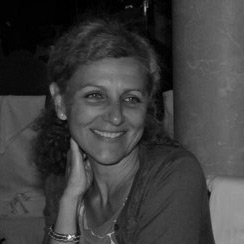 If it is my hand sticking the knife through his bones, severing marrow and spine to end movement. . . Block that thought, block that thought. Reroute, reroute. Look for a lead the way the man unplugs wires coated red and yellow for power, the way he connects black wires for earth, the way he uncovers slices of memory. Look for an outbreak of ergotism the way it thrives in bitter winters followed by wringing springs, the way it plagues with jerks and jolts, the way it bewitches into St. Vitus dance. I’m just cutting through the brim of a hat, the brim of the story, when the man, the real one, the flesh and blood man bent over my memory says, C’est l’heure des tartines1! or I’m coming, I’m coming! while the kettle whistles, and the toaster traps down slices of pain rustique—

My hands twist open a fiery glass jar, open the gift from the man, a gift to the man who salvages vanished memories, no bread, no bread man with a knife in the spine. That one is mine. I know the evidences—stabbed memory, vague delirium, things crawling on one’s skin. Gibberish! This poem is a total recollection of a dream-man, a dream of the man. It is difficult to crack the trick of a bread man’s confession.