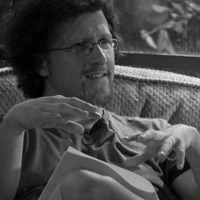 According to these bones, they say, this
was all water. Where we’re standing in our
waterproof boots, here in the Perkins Geology
Museum, was ocean, everything under the press
of the Champlain. This long, alien skull—at first
mistaken for horse by the worker whose shovel,
digging for railroad, struck bone instead—this skull
looks like a hundred pounds, but it once floated through
the brack hungry, and died that way.
And what after that?
The sea recedes again, inevitably, the drying sand strewn
with new bone—and all of us, or what remains, left to
some unimaginable animal and its tools of excavation.
And then sea again, and then land, until at some
point there are no more animals left to dig.
Do you understand that, lost whale? That
we will then no longer be here, none of us,
none, that finally it’s just the land and the ocean,
continuing their longer argument, our bones only loose
teeth in this debate? What changes? The land says
land, the sea comes all the way back to say sea.