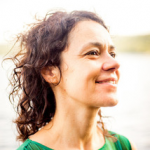 Each song spawns another

Universe, the size of a grapefruit.
A tiger, in a shock of vision,
tamed into a clock

now a story is linear
and spawns new universe

Each has a shepherd
who carves two universes
on an aspen

there are spoils in each,
follow the storks & silver
foxes basking in the cemeteries.

Each universe has saints and poems
& seven other dimensions

Each universe has pasture and precipice

Each universe has St George with dragon.

The fox had his mind made up before the flood. We domesticated the fox by feeding him the leaves of Bible. We confused prayer for a sunrise. We went barefoot in the snow. We made him a flaming savior. He hunts like a saint. Each muscle, a prayer; clasped in attention. Triangulates, cocks, each muscle fulfills its destiny. Caress. Arch. Cocks. Triangulates. An arc of wu wei to find that point in space. Astute dive towards innocence. Fox eats like a saint. Making music with its bone. With seven doors, a mouse under the snow. Fox avoids hunters, puts branches in the holes and when attacked by snakes, will turn its back and
bite the snake’s head, swing it
against the tree.
It bites the snake’s head,
it swings it against the marigold tree into its sainthood.

Fox, a word we did not catch by its tail
to break the silence

Pieces of gold – smelted, malleable, shaped in wax of little angel bees
burnished to reflect light. Unpolished we trap too much light
and become ghosts.

We carry vessels
to the graves.

When a person dies,
Colombians put jars with water
around the house
for the soul to quench its thirst.

We need to tame water by building canals.
Birds peck the water.
Priests, condors in flight.
One needs to catch their messages
of feathers – –