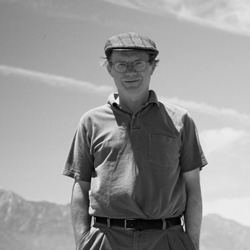 Marilyn Monroe caresses the ailing rodeo rider
who leans against her polka dots
outside the Dayton Bar in Nevada, those polka dots
all over her dress, like mumps, and the car door
open where they both share the same close-up.
The misfits broken up inside and out,
Montgomery no longer the pretty boy—

his scars covered up by makeup—and the camera like a thief
stealing from beauty, showing his cheekbones
sculpted into something hard as hubcaps, after his accident
on Sunset Boulevard, coming down that steep hill
from Liz Taylor’s party, while they were shooting Raintree County.
All that Hollywood in him gone: broken teeth pulled
out of his choking throat, his sports car wrapped around a pole—

in every gesture now something’s damaged, and Marilyn Monroe,
that mother, aging more each frame of film
and avoiding the camera, as if her face would explode
from what she felt down deep.
In John Huston’s movie death always speaks between silences.
Let the cameras run, he says.
Perce Howland, a cowboy forbidden to return to his ranch,

since his mother remarried. His life buried in gauze with all
those family secrets that he claws at—
the earth mother in her white hair not blonde
or any earthly color but a lie. She finds the screeching crash
again in his forehead, in thelongest suicide
talked about in Hollywood. Her skintight dress looking
for the next cue through each busty breath
swimming under the hot lights,
in the last movie she’ll ever make.