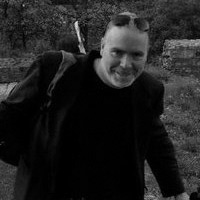 A flash of birds across the Erbil sky
dissolves, dissipates and vanishes
into the desert sun –
a discreet instability,
impulsive and determined.
None that I can name except to say
I have not seen them in my hometown
whose birds I all know: Red Breasted Demagogue,
Grime Throated Mission Creeper, Razor Beaked Oblivion.
When I say I, I mean a sunrise blanks the world
and hides my name.
When I say I, I mean this is how I know
the blind see only this world.
What the birds want to say and what
they do say is lost because they are tongue-tied,
unable to display as impulsive or determined
and I don’t blame them,
not knowing what to say myself.
When I say I, I mean that the locals direct me
to bridal shops and liquor stores.
When I say I, I mean a forgotten receipt
in the back of a taxi rushing between
the Noble and Van Royal hotels.
A morning bat wheels silent by
and disappears behind the minaret
swift as the dream of Nebuchadnezzar
and you know which one I mean. The muzzein begins:
Jens Lucan, 30, came to Kurdistan two weeks ago. He was staying at the Erbil Tower
Hotel. The police report confirmed that he came to Kurdistan as a tourist. Witnesses said
they saw him standing in the window of his room before he jumped. They tried to
convince him to come down, but he didn’t listen.
Perhaps you will also like:
Car bomb in Kirkuk kills 16, wounds 36
Perhaps you will also like
Refinery sabotage sets oil fields ablaze
The branch manager at the Siemens plant
offers workshops on teambuilding
available to the public. Next week’s
seminar on suspending disbelief
is cancelled due to
car bomb in Kirkuk kills 16, wounds 36
refinery sabotage sets oil fields ablaze.
The road to Kirkuk is raised just above the desert
as if to show intent,
as if to show there is a road and also that a road can vanish
and the time between when there is a road
and when there is not a road
is less than a flash of birds across the Erbil sky
and that even if you are on that road it may change,
be devoured by the swift impulsive sand
or long determined eyes and hands
and even if you get off that road
and go to a store in the family mall
and play husband in the edible undies section
and ponder what flavor each color might be
and then take the short walk from the ferris wheel
to the place where Daniel is said to be entombed,
you will still be subject to tongue tied impulses
inchoate determinations
and perhaps you may also like:
And he shall cast down many tens of thousands
but he shall not be strengthened by it.
And perhaps you will also like:
The king of the north shall certainly come
after certain years with a great army and much riches.
And when I say you, I mean me,
and when I say I, I mean I have no idea
what it is to say the mountains are your
only friends, but they say that here,
they really do say it.
When I say I, I mean then was the iron,
the clay, the brass, the silver, and the gold,
broken in pieces together,
and lo it became like the chaff
of the summer threshing floors;