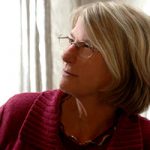 “Will God, or somebody else, give me the power to breathe into my canvases …
the sigh of prayer and of sadness, …of rebirth?”
–Marc Chagall

Outside, louder than street noise, the wind
is making itself heard.  Trees, wires, loose casements—

the whole world’s its instrument.   What does it want,
banging at these windows like desperation’s ghost,

rattling the students bent over their words, letters
on the page that look like something the wind could snatch –

feathers or leaves, or an eddy of roadside cinders
swirling up and strewn against the glass, scattered

like thought, storm-tossed marks impossible to read
as the lines my friend watched a concierge scribble

in a foreign city, as he got sicker, delirious,
was put in a cab, the note pinned to his jacket: address

of the only doctor in town who spoke his language,
or instructions to whom it may concern:  how to give

his soul to the wind….  Here, the wind snatches
other notes from the practice room next door

before the fiddler can gather them into a tune,
as if it howled at the thought those notes were his.

And the fiddle?  You can’t say it weeps,
though something in the sound grieves, perhaps for the tree

it was made from, or maybe it’s the horse tail strands
pulled taut in the bow that still half know

they were once nearly liquid,  flowing through fields.
Fevered and alone, my friend says he let fear go

as he floated across the city like something out of Chagall’s
klezmer soul – that fiddler drifting over rooftops,

doing what wind does – blowing though shirttails,
through fever and thought, as if its job were to loosen, to lift

every blessed thing, even our words in this room,
played like laundry on a line –

union suit, house coat, knickers – our pens
holding them down, our pens letting them go.