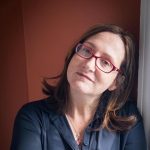 With the launch of the Spring 2018 issue, I’m honored to step into Richard Hoffman’s big shoes and write the editor’s note. Just a quick thanks to Richard Hoffman for being out of town (nothing personal, Richard).

I think it’s important to share that getting to the point of publication truly is a team effort—one that begins with our nonfiction readers—Cassandra Goldwater and Jill Johnson, who thoughtfully read each and every piece before nominating submissions for publication. Our readers work quietly behind the scenes, so they don’t get much fanfare, yet they are absolutely critical to the process. I’m truly thankful for their hard work and talent identifying essays that are not just beautifully crafted, but also a good fit for the magazine.

“The Ferguson” by JoAnn Hart in the current issue, is one such essay. Well-written and engaging, Ms. Hart’s piece simultaneously explores the challenges of memory with an investigation into her past, including a story of systemic racism that transformed a city. “Bringing up the Bodies, An Advent Story” by Gail Griffin is another beautifully written, timely and tension-filled essay that addresses racism—as does “Belonging” by thandiwe Dee Watts-Jones and “B-Side” by Daniel Mueller. Mr. Mueller’s piece (no relation to the other Mueller—I asked) offers scintillating details, humor and an engaging coming-of-age story within the confines of Fort Hood Army base in the 1960s.

In addition to these new essays, we also offer some Solstice Nonfiction Redux (or oldies but goodies) for your summer reading, including Andrea Vassallo’s “Breathe” (Fall/Winter 2015), Leslie Lawrence’s “Karl will Bring a Picnic” (Spring 2013), and Trent Masiki’s “Whiskey Under the Mattress; Playboy on the Porch” (Spring 2012). Like fine wine, these essays only improve with age.