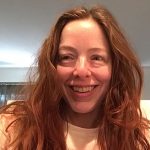 Betsy Sholl’s seventh book offers a world of contradictions, the friction of disparate and contradictory objects and experiences struggling to coexist. The first poem, “Genealogy,” begins, “One of her parents was a flame, the other a rope.” Odd juxtapositions continue with a light bulb’s envy of an apple, (“Still Life with Light Bulb”) and the contrast between the wind’s “little ruckus” and the solidity of a wooden clock (“The Wind and the Clock”). “Rush Hour” finds two friends, their “words/making light of whatever they touched,” confronted with a deaf woman struggling to communicate. In “Traps and Groove,” the speaker wants “her chair/at the table, and a waiter to take orders—” while simultaneously drawn to “something the drums were saying” inside a seedy club.

The book’s heart, however, is the question of how to celebrate a world containing violence, poverty, and loss. “[L]ast night my mind split between euphoria/and grief,” she announces in “Waiting Room,” a split projected onto a crow in “The Argument.” The speaker wants to praise Nature, while the crow admonishes, “For the sake of the dead, for the sake/of the murdered, don’t wax too eloquent…”

This crow is one of a flock of birds that nest in Sholl’s verses. Many are metaphor, equated with musical notes in “Poco a Poco,” failed poems (“Of the Many”), graffiti (“Trap and Groove”), and gypsies (“Laticho Drum”). Other times the birds are literal, as the crows that peck the eyes of the murdered in “Second Line” or fly into glass (“At the Window”).

Though a goldfinch reminds the poet of Mandelstam, she rejects the myth that birds are the dead returned, listing all her lost loved ones that cedar waxwings are not. In “An Exchange,” Sholl praises the chicken: “she sings/keeping watch over the ruined world.”

These musical poems sing with consonance, alliteration, and off rhyme. Music is also a pet subject of Sholl’s. In two poems, girls attempt to play the piano. The speaker struggles, making “a splintery ruin” (“Poco a Poco”), while in a later poem her sister is able “to give the piano all those forbidden sounds.” (“Tidal”). Music is comfort, as well as a stubborn assertion of aliveness despite circumstances. In “U.S. Clamps Down on Pianos to Cuba,” music triumphs, “too much music for anyone to block, the air/heavy with it…” A “Base Flute” sends out “sounds of the unmuffled gut set free/to bluster and honk, the drowsy heart/ungagged…” In “Out of Nowhere,” the speaker listens as “a voice—it could be yours/ rises out of midnight’s throat to give…a lone and barely whispered Yes.”

Still, music is no panacea. The Bach that Bonhoeffer listens to in prison may soothe him, but it does not stay his execution. “The Aging Singer” has a mouth “cut with crevices like a marionette’s.” And though “Bird Lives,” his recordings show a “life blown inside those riffs.” Like Sholl, these musicians have no easy answers, just the ability to look unflinchingly at life and sing its truths to the listeners.