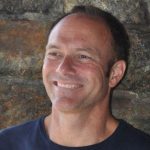 verb; untangle or unravel something; confuse or complicate
(a question or situation); noun: a tangle, cluster or knot

Wanna fly, you got to give up the shit that weighs you down.
—Toni Morrison

Here, it’s day. There, another sleepless vigil
of a fraying burqa. By the time these billowy clouds
reach the Hindu Kush, they will ravel or unravel—

it’s hard to tell who to trust when a word is a god
of mixed messages: the NGO tells her to tell her mother
to go with this man and he’ll put her on a plane to Ukraine;

the NGO calls at the thirteenth hour to tell her to tell
her mother this man cannot be trusted and she will be
detained in Kyiv indefinitely. M – O – M is yellow-white

yellow to a young synesthete trying to synthesize
the blood of visions. Then there’s the mercenary who
bids to go in and stick her to his pin at seventy thousand

bucks a head, a private angel for hire. What color is your
abjad? Here, you’re wearing a t-shirt to the smoothie café
for all to see exactly what you want to say: WILL TRADE

RACISTS FOR REFUGEES. There, you’d be stoned the moment
you step into the street. One minute faces are sunflowers,
fey smiles sweet as newborn lips kissing wonder’s honey…

the next we’re rummaging for buried hijabs we thought
we’d never see again, the anvil lowering lowering…
letters too dim to read., any pasture greener than

the grass burning beneath her feet. For smuggling her
daughters to Calabasas a decade ago, she’s on the list
to be executed—a vengeful vitriolic jinn hot on her heels,

her trochees fleeing iambs. How can she reconcile the snare
of Bolero’s militaristic ratatatat with the woodwinds’ lilting
zephyr when weather means one thing and its antonym—

a spinning heads and tails of fear and freedom?
She stares hypnotized by the blur of sides, the muezzin’s
pop hit singing her into oblivion…then like a deep-born

wave that knows its moment, snatches memory’s nemesis
in her palm. Mountains girding a mother-city she’s never left
shrink below. In the belly of a C-17 she fingers rills and ridges

of a minter’s stamp and feels her own relief swelling with self-
resolve, her human currency redeemed by her own action
vowing never again to be hoarded in another’s collection:

just another sacred worthless coin catching the sun
in its koan, another raveling worshipped unknown
thing in the midst of vanishing as soon as it’s known.