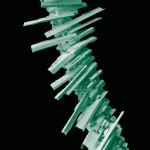 Blue’s on vacation. Your eyes
turn white in this light, ivory,

cream, eggshell, lace, you name it,
all the words for white with a hint

of some interloper. A friend told me
babies are parasites, little bugs

on the backs of their parents.
No one would know it was winter

except for that blizzard thing.
Cars hiding in their drifts.

Boston tilts back in the snow.
I’m eight months pregnant

and banned from shoveling.
The bambino takes his own

kind of nap in the little fishbowl.
We talk every day about hair color,

genetics, the way others discuss weather.
Soft things that fall from the sky.

People tell me this is the calm
before, as if a baby were slightly

venomous or an act of God on
an insurance claim. The first thing

a fetus owns are nicknames.
This little habanero takes

what he needs from my own
sturdy bones. You shovel in a world

toward the next house, and the snow,
drifting, without a place of its own.