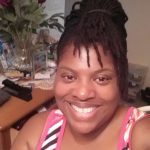 Let me take you into the room
where I slept in a stranger’s house.

of an innocent; then opened my eyes to see,
as if in chiaroscuro, a young man watching me.

In the dim light, his face a brown stone,
the contours of which have eroded with time.

He is the son of that house, the house where
I was boarded the summer before I began school

in America my new country. He’s long past
the age of school boys so why’s he watching

me with his hand restlessly moving in his lap? Done,
he rises without a word or has time silenced him?

It was so long ago. How often did it happen? I don’t know.
I told my mother a live-in domestic working far

from me, and I was taken away. No police were called,
nothing was ever said. I was supposed to forget—

let it sink into the oblivion of words not spoken.
It’s half a hundred years ago, but I never forgot

the boy, the room, the lamp and my fear
the summer before the first grade when I was six.