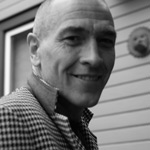 The moon glaring above Table Rock’s got me thinking about our field trip up there in ninth grade and falling in love with this girl I never knew before.

I gave her my sister’s cross I’d never taken off.

He had already left in the same car two years earlier then one day dropped it off in front of a hair salon’s not there any more. I could feel my dad’d been in that car when our neighbor took us to pick it up.

The Oregon Trail of Tears started at Table Rock we learned that day. They wanted the Indians gone so they killed a lot and told the rest leave. The Indians got together at Table Rock to go the woman told us like she couldn’t tell how to feel about it.

The girl, Cynthia, same as my sister except we called her Cindy, put the cross around her neck like it’d been hers all along.

We broke up three days later and she told everyone she’d never speak to me again, and didn’t, like she knew something on me.

Then I heard she cried about us on somebody’s ski boat until she threw Cindy’s cross in the lake and laughed like she felt better.

She’d been drinking beer everybody said to make me feel better.

After that I dreamed me underwater, the cross flashing and I couldn’t get myself to sink fast enough and when the shine reached bottom I’d wake up trying to get my breath.

Sometimes Cindy’d push me into a pile of leaves and fall in and we’d lay still longer than I thought I’d done anything.

Until one of us started laughing. Then it was on. I never lost a tickle fight and maybe she let me win.

She kept things balanced in her body so if I bumped her left funny bone she’d bump her right to even things out, said it made things easier to carry balanced that way.

The day after Cindy’s funeral, Dad was about to go back to Sacramento, and I went with him to fill up with gas.

We didn’t say much.

When we passed the junkyard Cindy’s crashed car was still on the wrecker, just inside the gate. I never knew if he saw it or if he knew I did.

Piles of cars lined up for a mile on the other side of that fence and after that day when I’d ride by I’d try and pick out Cindy’s but never could.

That lady said most Indians up there died of disease and hunger and plain cold, “Children too,” she said like it was occurring to her and one kid laughed out loud and no one, not even him, seemed to know why.

I know there’s no balance to what I feel now. No other side.

I helped this guy out two days ago and ended up with this pile of rocks that’d last forever so I’ve been smoking them and spilling them on the floor and not giving a shit but I started picking them up last night and now I’m crawling around smoking anything that looks white.

Until there’s nothing but giving in to the glare up there so I take the bicycle somebody left here, grab my hoodie and pedal off jerking around like Charlie Chaplin in a jumpy black and white movie.

Me and Cindy’d race our bikes around the block and Dad’d run to whoever came in second and raise our hand.

Sometimes during Saturday cartoons Cindy would fall asleep with one arm in the air and I’d knock it over until I learned to leave it that way.

Sometimes she’d line up dominoes in patterns all over the place and wait for me to knock them over and in all of my memories Cindy’s laughing.

The cemetery’s sitting up high in the moonlight so it looks like rain’s rising.

Wet leaves cover Cindy’s grave and I sit on my bike and stare into the pile, remembering the last time our family stopped at the lake and stood in front of the water like we were already in a memory. Dad’d be gone in two months, Cindy dead in two years. Her cross’d be out there somewhere because one day I’d give away the only thing that meant anything because as Mom said at the time I wanted somebody pretty to like me. Wasn’t anything more than that.

She calls, Mom does, and acts like she doesn’t know how I am.

Last time said she might marry some man in California. Said he was a horse-man like that’s what she’d been looking for and I still don’t know what that means except he has a bunch of horse shit around, one of those trailers.

That day at Table Rock I wanted to ask didn’t the Indians have horses but got wrapped up in that girl and my sister’s necklace.

Me and Cindy and Mom always liked looking at the water but Daddy would walk down the shore and find a seagull feather, or a bottle, or a license plate from a far away state to give Mom.

The last time he brought her a piece of driftwood he said looked like a bird.

He made us look at the light on the water and where we usually didn’t we did when I remember.

The gravestones sway and I see Cindy’s lost in row after row of dead people. I think how her name was used by someone who would throw away something like that.

In front of me this tombstone’s solid. He died in 1955 so somehow it’s surprising how easy Jebediah Morgan’s tombstone goes over and the sound bouncing around underground.

Mary Tolling’s marker, with praying hands pushing out of the rock, takes a lot more and I almost give up right before it goes down, the hands pointing up now.

I kick over another without looking, then another, and more because I got the hang of it, and before long all around Cindy’s a big dead pile and I look over what I’ve done and don’t feel one way or the other, kind’ve the way I remember not knowing how to feel when Dad’d show us something like the lake that day. Could be happy, could be sad. My eyes’d water in a way I didn’t know.

A big gold sheet of light barely on the water, waves breaking through in silver, and the different shapes of shines and slivers of shimmer and my dad kneeling down and taking my shoulders like it doesn’t matter we’re about to leave, we’ll take all that with us.