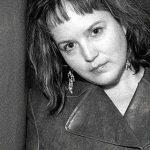 The Shape of the Keyhole
by Denise Bergman
Black Lawrence Press, 2020
59 pages

The accomplished writer Denise Bergman composes mostly historical poems – poems rooted in a situation, place or person during a period of time.  She has written three other books of poetry: Three Hands None (Black Lawrence Press, 2020), A Woman in Pieces Crossed the Sea, about the Statue of Liberty (West End Press, 2014), The Telling, a book-length poem about a relative’s one sentence secret about her escape as a refugee (Cervena Barva Press, 2014), and Seeing Annie Sullivan, based on the early life of Helen Keller’s teacher (Cedar Hill Books, 2005).

There is a brief historical account, given in the forward of this book, from which Bergman spins her extraordinary refractive and fragmentary poem.  It consists of a spare account of the hanging of a woman for witchcraft in 1650 in Cambridge, Massachusetts.  The woman, who is nameless in the account, was accused by the child’s nurse (also nameless) of “bewitching to death” her friend’s child.  Immediately after the woman was hanged – denying her guilt to the end – “it was discovered that the child died because the nurse brought him with her into the woods in the freezing cold so she could be with her secret lover.”  We are never told the fate of the nurse.  The poetic text concerns the arrest, trial and eventual execution of the friend, who was married, and who is sometimes referred to as “Mrs.”  One might assume that being married afforded her some protection from this persecution but, in this case, it did not. Her husband is helpless to aid her and is by turns, guilty, indignant and shocked but remains a silent witness to her fate, even one shunned by a merciless and ignorant community.

As cited in poet Diane Seuss’ recent memoir essay for Poets and Writers magazine, Gregory Orr identified four temperaments possessed by poets’ work: story, structure, music and imagination.  And in order for a poet’s work to expand and deepen, he advises that the sweet spot temperament be augmented by one of the other temperaments– story and structure belonging to a more linear, narrative focus and music and imagination following a freer more lyrical and expansive style. I think there is something useful about Orr’s rubric for examining poetry and poems.

Bergman uses both structure and music/imagination in this book-length poem.  Implicit in the piece is the “story” – the plot which we are given at the outset.  But rather than write a prosy narrative poem about this story, Bergman embarks on a lyrical and metaphorical discourse of fragments, some of which are contained in footnote-like citations at the bottom of some of the pages.  She structures the story by dividing the time frame into four parts: Day One, Day Two, Days Three, Four, Five and Six and Day Seven. This gives the work a cinematic feel and draws out the ordeal across this passage of days.  She uses her considerable imagination to inflect and elaborate upon this historical episode, enlivening the main character with feeling and thought and using language that employs word-play, repetition, metaphor and ellipses.  While she and the reader know what happens, the author depicts how it happens in a profoundly original and poignant way.

The central metaphor of the book, indicated by its title, is the notion that rather than a key fitting a keyhole, the keyhole had been shaped to fit the key, i.e., an innocent woman is condemned to death for a crime she did not commit.  The circumstances and “evidence” of her being a witch with evil powers are all fabricated by an atmosphere that is like a nightmare of suspicion and resentment.

In Day One, the 2nd entry, Bergman describes the knock of the constable on the accused woman’s door:

“No warning, the knock not a warning

The knock a command

Read it forward, in reverse

So, the wordplay on the double-meaning of “sentence” – a duration of time spent in jail or a punishment, and the sentence as a grammatical structure of the English language that usually proceeds with subject, then verb. She inserts the verb “ignite” in the middle as if a fire has been lit and then follows with “verb subject,” so the actor does an action and then the action is visited upon the subject. The knock is the ignition.  And then the fatal lines. “The end starts here,” which resounds with the foreshadowing of this woman’s demise in the constable’s knock, the first sound we hear.  And at the bottom, like a footnote, it reads:

Thus the writer spells out these very dire and backwards circumstances.  The woman doesn’t yet understand what the knock means for her and the codebreakers – or townspeople or detectives are “deep asleep” if  “ever awake” – which key—what is the key to unraveling the mystery of the dead child?  And then Bergman introduces her brilliant metaphor: “the shape of the keyhole is the shape of the key.” So, we wonder, how do people make assumptions, alter the foundation of fact, shape the landscape to fit their picture of it?  It’s backwards.  They should find the key to unlock the mystery but instead they shape the keyhole to fit what they “know,” altered by prejudice and conjecture.  This is the “nightmare” Bergman refers to as a thread throughout the book.

Over the course of three pages in Day One is a “Told retold” sequence: in the first –

Why does no one ask why

she killed a child

would want to kill

could she not stop herself

have outgrown their skins”

“She and the boy built a nest

Below the page is a footnote-like elaboration of this scene where the author places the event in the woods, the scene of the crime:

“in the vacant woods

in the well-tracked woods blind deaf

woods of lovers’ trysts and secret

woods too distracted to notice a woman and child soothing

We see that the woods are blind and deaf and cannot tell of the secrets they enclose. She alludes to both the accuser’s kindness with the boy, trying to heal the bird and wishing it “future and flight” – what we and the accused wants for herself now.  And also, the greed and lust of the nurse with her secret tryst with her lover and coins buried.  The woods become real in this wonderful passage, and like the townspeople they are “too distracted” to acknowledge the hidden truth.

As in the final passage in the book, the Nurse has her say, accuses the woman of witchcraft and murder:

“She lured him with her familiar

her hex into his skin, lifted

In the section titled Day Two we have the trial.

Jurymen proud to be picked

know what they are told they know

no need to listen—

Nothing can be said

No one says the nothing.”

And in a footnote-like poetic code, Bergman spells out the truth, like a nursery rhyme:

Toss in some this some that and chant

Thus, it is the jurymen who are conjurying a false scheme, blinded by smoke, they are already beholden to a guilty verdict.  In fact, they are the real conjurers.

And this section ends with the Nurse recounting to herself how, when she brought the boy home from the woods,

ice-gritted mud on his arms

and his pants and jacket

the snow in his cuffs

So, she acknowledges the snow, the ice, the mud, how he was in fact caked with cold but she never says that he was in fact, frozen dead.  She leaves this detail out.

Days Three, Four, Five and Six are composed in streaming paragraphs, beginning with a citation of Massachusetts colonial law:

“No man {sic} condemned to die shall be put to death four days next after his {sic}condemnation.”
And in fact, she is executed just four days after her condemnation.
“chained to jailhouse shadow   four days will leave no clutter
no untidy loose ends   adults muzzle children’s question   tear
question into eight letters kick them aside so innocence doesn’t
trip    pieces of her ride away on wind”  ( p 37)

The jailed woman imagines her hanging:

Bergman uses the metaphor of  “nightmare” again to describe the whole procession of events and the kind of dizzying glee the townspeople are susceptible to, and how justice loses the race.

Massachusetts law requires that three witnesses testify to the accused’s guilt. In this case we have:

three; Nightmare, who led the race from the get-go and never

There were no actual witnesses to the crime, except the Nurse who deceived the town, and Silence who was handed down the oxymoronic “loud acquiescence” and Nightmare, a fear and hatred and dread of a supposed supernatural trick against a mere child, that led the whole affair from the beginning and never “relayed the baton” – never gave in to reason or justice.

At the end of this section, she writes:

On Day Seven the accused woman is executed and we’re back to the formatting of Day One and Day Two.

“Her head in the teardrop loop

Rope, a tug is all that’s left

After, where will they take her,

on whose shoulder to what cart what horse

With whose sharpened spade

As for the onlookers:

“The butcher’s chin drapes his collar,

his collar is his choker but he is not choking

the butcher, who catches blood’s gravity in a pail

cries but lets no one hear,

cries but no one listens, braces, stiffens—

Inside the crowd alone,

Bergman contrasts the heavy butcher of the town who knows blood and catches its gravity, the way it must fall downward and its weight, “in a pail” and the woman’s husband who is trembling with emotion and grief, who is sobbing silently and who is being left behind and alone as the crowd’s circle widens around him.  With just a few subtle brush strokes we get the picture of this hanging, of the indifference of the guilty townsfolks and the pain of the husband who is ostracized.

As for the woman who is hung, we are told that:

The woman begins her life with the utterance of a child’s first word,” mama” and ends her life denying the guilt and the consequences of this guilt that has been foisted upon her innocence.

Bergman ends with the Nurse who confesses.

“this once only
and I was
cold too, naked to the boy looking
up from the ground
naked to (I won’t say who)
then I dressed
and lifted the boy to my chest
and backstepped home
I wouldn’t hurt a fly, or myself
won’t let
myself be hurt.”  (p 57)

The Nurse protects herself and her lover, confessing that she was naked in the woods and cold, the boy too.

I highly recommend this dark and magical poetic treatment of a shameful miscarriage of justice in our history.  Bergman succeeds in combining the elements of story, structure, music and imagination in this book-length work. Having read it, I feel compelled to explore her other work. She is an exceptionally good writer.