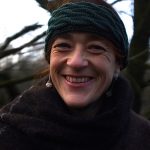 Poetry in translation
by Barbara Korun

Anything’s good enough for them!
dirty concrete floor
wet clothes
endless waiting in lines
in exactly one line
two thousand people in a single file
one behind the other for hours and hours
for two slices of bread for a fish tin
an apple and a pint of milk
and for water a pint of water

how can I say
that we guarded them as the most terrible
most dangerous enemies
that we disinfected passageways after them
warned the local residents through the radio
they shouldn’t let out their pets
lest they contract horrendous diseases
tuberculosis, cholera, scabies, lice

I won’t start cleaning the tent while these
devils are in there! shouted the elderly woman
employed at the camp through community work
I won’t have anything to do with them, let them go
back to where they came from! she screamed
amid the night
amid the quietest night at the camp
when she woke up from the sleep
of the just

in the fields silence fog
but in the distance the light from searchlights
helicopters the whine of sirens police
cars army and its trucks
special forces armed to the teeth, their faces
covered in black caps, helmets and bulletproof
vests, and machine guns handguns
billy clubs shields and covered faces –
even humanitarians wearing gloves
and masks across the nose and mouth

I will never forget it

Translated from the Slovene by Barbara Jurša

Barbara Jurša is a Slovenian translator, poet and English teacher living in Ljubljana. She has translated some of the works of several contemporary Slovenian poets, including Jana Putrle Srdić (Anything Could Happen, 2014) and Brane Mozetič (Unfinished Sketches of a Revolution, 2018).