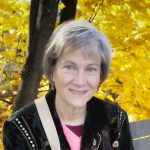 People without an app need a map, and Lynn just gave away her last map. Its legend shows a hotdog for a restaurant and a bed for a hotel. The map was in her glove box where she’d never in her life kept a glove.

She’d gone to Valley Hardware, intent on buying what apparently was her town’s last outdoor chaise lounge. She’d called around. The last one in stock, the last month of summer in what was probably the last year of her mother’s life. The chaise was for her mother, who, at 92, wanted nothing more these days than “to lounge outside watching the birds.”

And there it was, as promised to Lynn on the phone, the green-cushioned chaise in the patio section. It looked perfect. Except for one thing.

The man sleeping on it. Soundly sleeping.

Sleep of the dead, Lynn was thinking, staring at the End-of-Summer sale tag hanging eerily near the man’s foot like a toe tag.

We can give him the boot, someone said suddenly.

Lynn turned to see an orange-vested woman tip her head towards the sleeper. Are you the one who called? asked the woman whose badge read Shirl.

Lynn nodded. Those stains on the man’s jeans looked like blood.

Someone else will grab it if you don’t, Shirl said.

Lynn believed this. It’s for my mother, she told Shirl, buying a little time since there was still the problem of the sleeping person. In Lynn’s mind he’d acquired something like squatter’s rights to the chaise.

Then out from the Valley Hardware ether sphere came the store’s deus ex machina. Aboard a shiny silver wheelchair. She was a plump-cheeked woman who, with her tiny tight grey curls, Lynn thought resembled the very woman for whom she was buying the chaise.

Is he real? the woman asked. Re-al? Just as any mother would have. The obvious question. The one Lynn hadn’t even thought of.

Shirl and Lynn shook their heads in that way that Lynn knew probably looked like no but meant yes.

The plump-cheeked woman pushed a joystick, and her chair buzzed ahead. Then she stopped, leaned down, and tugged gently on the man’s shirtsleeve. Time to wake up and smell the roses, she said.

Taking his time, inching forward little by little, finally he was eye to eye with the wheelchair woman. Roses, he repeated softly.

Then he saw Lynn and Shirl a little ways off. Roses, he said once more as he sat up. By the time he’d gotten to his feet, Shirl had nabbed the sale tag and handed it to Lynn.

As instructed, Lynn paid for the chaise, then drove her car to the pick-up door. She had just opened her trunk when the sleeping man, now brightly awake, appeared.

Hi, he said, recognizing her. Neither said a word about the chaise. I wonder, he asked, if you could tell me which way the river is. I’m all turned around today.

She walked around her car and dug out the map, then came back and opened it across the trunk lid. The river weaving through her town zigged and zagged in bold blue. They both stared at it. She mentioned how it had jumped its bed a hundred times way back when. If that story had been in the map’s legend, she was thinking, they’d be seeing here a river, there a river, everywhere all at once a river.

The map was not a fair trade for the chaise, of course, but Here is where we are, she told him, and marked an X for us and There, there’s the river.

So close, he said. So it’s still right there?

She put her finger into the river next to his. Still here, she said. Still right here.

I shouldn’t let my anger pick at my gut the way it was doing. Pick pick. Like a fingernail in there. Going after a scab.

I opened the map, tossed it down, and sat on it. I wasn’t mad about the map. Getting back on the main road, I’d have found my way to the river, my path, my spot, nabbing my fishing pole from inside the tippy fir tree’s boughs. I stuck a cricket on the end of my line. I was mad she didn’t remember me. She had no clue.

She’d given me a C- one time on a paper. Raoul, she’d written, please proofread!

I thought I had.

I was fading back then.

When she spoke a little while ago, it was her voice I first recognized from a couple decades back: Raoul, whatever happened to paper number two? Us two outside then in the hallway.

As much as I didn’t want to, I gave it to her. It was a holy mess as Gran used to say. But the teacher smiled when she took it.

I am hairier now. She was greyer. Is greyer. Seeing her made me want to proofread my own thoughts. Days I give blood, I sit and wait, nibbling at my cookie as I write a page about my life.

Nibbles. I was getting nothing. The cricket just floated around on top of the river. I’d caught a few fish here back in the spring, but August is a bad time. The map under my butt crackled when I moved. Sit still, I told myself.

I’d begun to feel the fingernail less. Only in town did I get lost. By the river, east and west were clear—the camp due west. Granny Bette often walked ahead of me in my mind. The river goes wherever it wants whenever it wants.

Twenty years ago, I had axes to grind. The supply seemed endless. The community college had a tutoring center (ax!), the teacher had made me an appointment (ax!), and the tutor said the “syntax was hard to follow” (ax!). The red-tipped exclamation marks were matches waiting, impatient to be struck.

Enroll awhile and drop. Enroll and drop. Story of my life. Content of the pages I wrote most days with the unfollowable syntax trekking the downtown streets where everyone hurries like the goose who just shot by overhead, ignoring me and clearly having an appointment and knowing full well how to get there in plenty of time. One day I thought I was a pioneer, but that day passed.

“Was that a heron?” Dorie asks.

“I missed it. I’m reading the paper.”

“If I try to back this contraption over the slider door tracks, it’ll ruin them.”

“I ordered you a little ramp thingy.” Shirl folds the paper.

“That’s what you said last week.”

“Why’d you let Raoul sleep on that lounger this morning?” Dorie keeps both hands around the condo’s balcony railing.

“Maybe not the best idea, but I thought that woman might pass on it. Then we could keep using it as a floor model, you know, and generate more orders.”

“One of these days I might have to fire you.”

“I think another heron just flew by,” Dorie says. “Today’s a lucky day then.”

“You shouldn’t be standing so long. Hold on tight, okay?”

“I can stand here for ten minutes.”

“Who doesn’t? I hardly recognized him.”

“The river seems so low. Is he looking for a fish or what?”

“I can barely see. The water’s just a trickle these days.” Shirl cranes her head. “I guess that’s why it’s called a peek-a-boo view.”

“You can see better if you stand over here. Just hold to the rail.”

The last time I saw the river, it was flooding the road, and my daughter just “had to be there.”
Something about sandbags. We’d had to walk across a lumpy field since the water had already covered the paved pedestrian trail, passing a fir tree that had a fishing pole tucked inside its boughs. The red bobber had caught my eye. I pointed but Lynn kept us moving along a path. In that field above the trail, she unfolded a rickety lawn chair, stuck me in it, laughed, and plopped an enormous floppy hat on my head.

“Just stay here and don’t move,” she said. “I’m watching you.” She mentioned more about levels and cresting and blah blah.

I watched as she headed downhill and came alongside some people. A boy handed her a shovel, and after she took it, she turned to me and raised it like the sword of the realm. All I could hear was metal smashing into sand, and sloshing into plastic bags. The people blurred into a busyness of arms, which the shovels seemed to propel to their own purposes.

She’d left me a bottle of water. Several bottles really. As we’d trooped over the dirt clods, she said she still had “six papers to grade but sandbags seem the better option today.” She is my only people now, a strange duck. She lives on a high cliff of books. She climbs up there every day, as she has her whole life, all on her own. She says the view from there is incredible.

I remember sending a thought towards the river: Last time I’ll see you, river. Did Lynn know too? I could still walk then—if I held on to her. Me in my unzippable-zippered sweatshirt. “Don’t move,” she kept saying. I was promised a fizzy pink wine when we got home. “Absolutely,” she’d said.

Her people came by and I handed them the waters. They asked how I was doing. They talked Lynn’s talk: water, inches, hours, breeches. They said their names, but they were all Larry, Curly, and Moe to me.

Overhead, when the geese honked, Lynn glanced at me, and I looked up. Then she looked up. Everyone looked up. It was sweet to see the shovel-and-arm machine pause.

Lynn has never believed me about the river freezing, a time quite clear in my mind. A sheet of ice just thick enough, just enough atop the swift current below. Yes, I told Lynn, barely enough ice that we could use our skates. It was the perfect way, the only way, I’d pleaded to my own mother, for us to get into town on time. We couldn’t miss the dance! Those god-awful skates. The other girls and I laced them on. Little Bette went first. She was the bravest. Then a few quick strides, and voilà—we’d crossed the river.