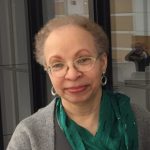 In war there are two kinds of soldiers, my dad said:
those who fight for a paycheck, and those
who would rise for a cause. Be very afraid

of the second one—too much to prove. My Jamaica-bred
dad swapped crop dusters for Mosquitoes.
There was one kind of pilot in Britain with the colour bar lifted.

But the Yanks brought over another war, divided
one side white as contrails, the other dark with Jim Crows.
Brought Tuskegee Airmen, who still rose to the cause. In their red-

tailed P-51s they sicced the dog on dogfights, safely escorted
every heavy bomber back to base. At the briefing—their race disclosed—
from the white bomber crews there were only two kinds of cred:

curses and spit. Next sortie two white squadrons were tapped instead
to fly defense. Fourteen bomber planes turned into ghosts.
Who else would rise after such cause? The Red Tails rebounded.

Machines in the Sky, Dad tagged them, from an ace’s respect.
But dogmeat. They got branded The Expendables, not black heroes.
You, rise slowly. Give them no cause. Be very afraid.
It’s war here, with two kinds of justice—badge and bullet, Dad said.