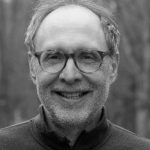 When my friend calls from the West Coast,
he tells me about his blurred sexuality,
his confused Y chromosome, floating
in a gray jelly, deficient in androgen.
He’s got a list of all the famous women
who are really men, and the famous men
who should be women.
I’ve got a list of all the secret anti-Semites
including the Jewish professor
who teaches Holocaust studies,
but identifies a little too closely with Himmler
and the guy at the Outdoor shop,
who insisted there was nothing wrong
with the shoes I returned—sole unglued—the problem
was my feet. “At this age,” I say, “We’re all a little
uncomfortable in our own skins.”
Near the table, my dog thinks she’s a deer,
letting her ears rotate like antennae
and bounding away from me.
And a stray gray cat pretends to be
part of our family, lounging
on the dog’s futon outside on the deck.
Though he dresses in dresses
and his face has grown round and soft
from the hormones, my friend still only loves
women’s bodies. I love women’s bodies too,
I think, but mostly from memory.
Now my friend talks about how he wants
to make love to this woman he has known for years,
the wife of one of his closest friends.
“Dave doesn’t understand her,” he says.
I’m pretty sure that’s his testosterone
kicking into gear, even if his “Y” chromosome
appears to be wading in the wrong pool.
As we talk, cells are reproducing
by the billions, even trillions,
male and female genes combining
and recombining until fish walk
out of the waters, lizards roll
over in sand, until dragons again
breathe fire into weightless windows,
and dinosaurs dally in the tall grasses,
the world pumped full of sex
and not a thing we can do to stop the onslaught,
except wag our tails and race upstream
toward the white rocks.